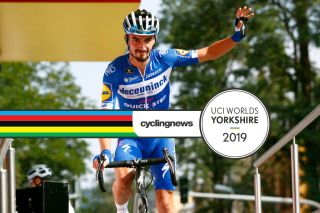 For two weeks in early August, Julian Alaphilippe (Deceuninck-QuickStep) tried as best he could to take a break from being Loulou, the man who had so ignited home hopes on the Tour de France.

He had carried the maillot jaune for 14 days, reaching Paris in 5th overall, and while the precious garment can seemingly lend a rider wings, its demands can weigh a man down. Following the Clasica San Sebastian in late July, Alaphilippe eschewed the criterium circuit and left his bike aside altogether for the bones of a fortnight.

Alaphilippe sacrificing races for freshness ahead of Yorkshire Worlds

"I didn't change but obviously it changed quite a lot of things around me. Even if I switched off my phone, everywhere I went people were speaking about it," Alaphilippe told reporters in Quebec City this week ahead of Friday's Grand Prix Cycliste de Québec.

"That break was obligatory. I was mentally and physically saturated. It's hard to explain. It was necessary, and it did me good. It was hard when I started back, but I was motivated to train again, and time goes by quickly. I'm here already in Canada, and I'm only five races from the end of my season."

Alaphilippe's year of years began on a winning note at the Vuelta a San Juan in January, and he went on to stitch together one of the most remarkable spring campaigns in recent memory with victories at Strade Bianche, Milan-San Remo and Flèche Wallonne.

In July, the Deceuninck-QuickStep rider weaved a fresh tapestry when he showcased hitherto unseen staying power in the high mountains to come within two stages of winning the Tour.

Now, in the third and final phase of his season, Alaphilippe has a chance to complete a remarkable triptych with victory in the World Championships. He will line up in Yorkshire as the outright favourite, but pulling on the rainbow jersey on September 29, he insists, is an opportunity rather than an obligation.

With a dozen wins to his name already this year, Alaphilippe's season is already a success, though he is also mindful that he may never enjoy a period of aristeia such as this again in his career.

"Everything is a bonus from here," Alaphilippe said. "Of course, I'm motivated by winning and I'm riding now to win more races. I'm only doing big races in the last part of the season, so if I win again, it will obviously be a nice victory, but it won't be catastrophe if I don't win either.

"A season like that, you can't repeat it every year. I'm well aware of that, and that's why I'm motivated for the end of the season, to take advantage of it. But I've said it before and I'll say it again, everything from here is a bonus."

Despite his lay-off in early August, Alaphilippe reported little sluggishness during his return at the recent Deutschland Tour, where, for once, he left the business of winning to others as he felt his way back into competitive action. "There wasn't much stress compared to the Tour, but then nothing is comparable to the Tour," Alaphilippe said.

"It was also one of the first races in a long time where I started, maybe not without ambition, but certainly without pressure. It was really relaxed. My state of mind in this moment is very relaxed, without any stress, despite what you might imagine with the Worlds coming up very soon."

A year ago, Alaphilippe entered the Innsbruck Worlds among the top echelon of favourites, but his challenge guttered abruptly on the arduous final lap. "It was a lack of freshness, I have no excuse," said Alaphilippe, who harbours rather more regrets about the way his late attack was snuffed out in Bergen twelve months previously. "I was only a kilometre short, and that's hard to take…"

To safeguard against the accumulated fatigue that left him flat in Austria last September, Alaphillipe has deliberately followed a lighter programme in the build-up to this World Championships. It was almost self-evident that his road to Yorkshire should wind through Quebec and Montreal rather than take in the Tours of Britain and Slovakia.

"That was a great experience but maybe not the best path to the Worlds. Making mistakes isn't a problem, it's just important is not to reproduce them," said Alaphilippe, who will line up as a favourite in both Quebec and Montreal on circuits that chime harmoniously with his talents as a finisseur.

"These are races I really like, the GP de Québec more than the GP de Montréal. These are two of my favourite races. Circuit races with finishes like that are perfect for me. Of course, to win here, you have to be on top of your condition and I don't think I'm at 100 percent yet. But I hope to enjoy them and be there in the final."

Alaphilippe arrived in Canada on Tuesday afternoon after catching a charter flight from Paris with the bulk of the participants in this weekend's races, the GP de Québec and the GP de Montréal. On his first evening in Quebec City, he devised a novel way to keep himself awake long enough to adapt to the time difference, playing table hockey in the company of teammate Dries Devenyns.

"It helped us to kill the jet lag," he grinned. "It was me and Dries against two other riders – and we won, too."

Story of his year.