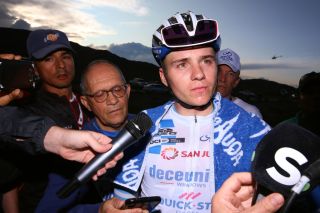 Deceuninck-QuickStep’s Remco Evenepoel was forced to work hard to retain his overall lead on stage 5 of the 2020 Vuelta a San Juan (Image credit: Getty Images Sport)

It wasn't supposed to be like this. Thirty kilometres from the finish of stage 5 of the Vuelta a San Juan at Alto Colorado on Friday, Remco Evenepoel (Deceuninck-QuickStep) and Oscar Sevilla (Team Medellin) found themselves in the second echelon, over a minute behind a lead group populated by danger-men. Separated by 23 years, the two niños contesting the general classification were now united in desperation. The ageless one, face contorted into a grimace, was showing his years. The young one, lips pursed in frustration, was showing his inexperience.

And yet, and yet. Much like Mathieu van der Poel during his astonishing display at last year's Amstel Gold Race, Evenepoelccs outlandish strength seems enough to iron out the occasional wrinkles in his race craft. It was an error of youth, perhaps, to get caught out when the echelons formed with 40 kilometres remaining. Pieter Serry was the only Deceuninck-Quick-Step teammate Evenepoel had for company once the second group had taken shape, but after he had exhausted himself, the 20-year-old had to shoulder the burden alone.

"Sorry for my words, but I was, like, 'Fuck, I'm fucked,'" Evenepoel grinned afterwards when asked his thoughts as the Vuelta a San Juan looked to be slipping from his grasp. "That's life. I had a very good team who helped me for a long time, but, in the end, I had to do it on my own. And, luckily, I was strong enough to close the gap."

In his short, meteoric career, Evenepoel has made a habit of such breathless pursuits. At the 2018 World Championships, he won the junior road race after a dramatic fightback. In the elite race in Yorkshire a year later, he seemed to rage against the very concept of losing during his forlorn attempt to pace crash victim Philippe Gilbert back to the peloton.

Here, just as the Vuelta a San Juan looked to be slipping from his grasp, Evenepoel suddenly tightened his grip. Over the course of 12 kilometres, with occasional turns from allies of circumstance like Sevilla and Simon Pellaud (Androni-Sidermec), he chipped away at his deficit, closing to within touching distance of the front group as the climb to Alto Colorado began in earnest and making firm contact with 8.5km remaining.

"I think we really helped each other to stay on the podium," Evenepoel said of Sevilla.

Most riders would have contented themselves with saving the overall lead. It is a measure of Evenepoel's boundless ambition, or perhaps his limited range of cycling emotions – in two years and 10 months as a competitive rider, he has done rather more winning than losing – that he evinced disappointment at not having the strength to win the stage. It wasn't for want of trying, as he made two accelerations on the steepest sections near the top after the front group was whittled down to 10 riders, but he had to settle for fifth on the stage, four seconds behind the winner Miguel Florez (Androni-Sidermec).

"I really lost a lot of power by closing that gap, so it stings to think about it, but not too much because I still have the jersey," Evenepoel said. "It was a bad a moment. Shit happens, but it didn't turn out badly, so I think I can be happy."

With two flat stages remaining, Evenepoel is still 33 seconds clear of Ganna and 1:01 ahead of Sevilla in the overall standings. Deceuninck-QuickStep directeur sportif Davide Bramati wore an expression of wonderment and relief as he studied the revised general classification on a screen in the press tent after the finish. If Evenepoel made an error of naivety in missing the split, he retrieved the situation with a performance that underlined his strikingly mature physical strength.

Evenepoel, for his part, termed his positioning as "a mistake but also not a mistake". He and his Deceuninck-QuickStep team had been at the front on the descent of the penultimate climb of the Alto de la Crucecita but found themselves swarmed left and right after the road flattened out.

"Two Brazilian guys in front of me left a gap and I closed that, but then I saw another group and there was a gap of 50 metres," he said. "It was a moment of panic. I was in a good position, and maybe I should have fought more for my position, but I didn't want to cause a crash."

Twelve months ago, as a 19-year-old neophyte, Evenepoel was distanced on the lonesome road that rises to the sparse summit of the Alto Colorado after working on behalf of teammate Julian Alaphilippe. The question scarcely needed answering, but it had to be asked all the same: how did Evenepoel compare his display on Friday with last year's ascent of the Alto Colorado?

"Last year, after an effort like today, I wouldn't have been able to end up in the front group. Today, if I didn't use the power to come back, then maybe I would have gone for the stage win," Evenepoel said. "I think it's clear that I have become much stronger than last year."