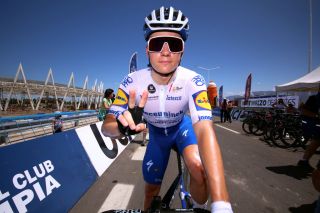 Remco Evenepoel (Deceuninck-Quickstep) will make his 2020 European racing debut at the Volta ao Algarve this week, with his time trial skills and recent success at the Vuelta a San Juan in Argentina making him a natural overall contender despite the likes of Geraint Thomas, Rohan Dennis, Miguel Angel Lopez, Vincenzo Nibali, Mathieu van der Poel and Dan Martin on the start list.

The five-day race includes two flat stages for the sprinters, two uphill finishes to Alto da Fóia (7.4km at 6 per cent) and Alto do Malhão (2.6km, 9.4 per cent) and a final 20.3km-long individual time trial. It is the first time for eight years that the race ends with a time trial, with the rolling course south of Lagoa expected to make the decisive time gaps and crown the overall winner.

The race route seems ideal for European time trial champion Evenepoel. He dominated the 15.5km time trial at the Vuelta a San Juan and then defended his lead on the key mountain stage to Alto Colorado.

Last year the same time trial was held on stage 3, with Tadej Pogacar (UAE Team Emirates) holding onto the overall lead after winning alone the day before on the climb to Alto da Fóia. Pogacar has opted for a different race programme this year and will head to the UAE Tour, leaving the road open for strong on-form time trialists like Evenepoel.

The 20-year-old Belgian returned home for a few days after his victory at the Vuelta a San Juan but after a test in the Bakala lab on February 10, he soon headed to Calpe in Spain for a week of training before moving onto the southern coast of Portugal. After the Volta ao Algarve, Evenepoel is expected to ride Tirreno-Adriatico and then Ardennes Classics as he builds towards his Grand Tour debut at the Giro d'Italia in May.

The Deceuninck-QuickStep squad for the Volta ao Algarve also includes Yves Lampaert and sprinter Fabio Jakobsen, who won a stage and finished twice at last week's Volta a la Comunitat Valenciana. However Evenepoel was given centre stage when the team confirmed its line-up. Also part of the Deceuninck-QuickStep team are Portuguese WorldTour neo-pro João Almeida and hard working domestiques Tim Declercq and Florian Sénéchal. Jakobsen's new leadout man Davide Ballerini has fallen ill and been replaced by Iljo Keisse.

"Remco will find a good course for him, but at the same time demanding. The technical time trial on the final stage will be an important test for both Remco, who we hope will get a good GC result, but also for Yves, who podiumed in the Algarve ITT last year," directeur sportif Tom Steels explained.

"Algarve is one of the nicest races you can do in the beginning of the year. That doesn’t mean it’s easy; the parcours is an up-and-down one, which makes it a perfect test before the big races of the spring. Fabio, who won a stage in Valencia, will count again on Davide for the lead-out, but also on Florian, who starts his season next week, while João and Tim will be there to control the race."

Cyclingnews will have full coverage of the Volta ao Algarve; with Daniel Ostanek on the ground in Portugal gather exclusive news and interviews.