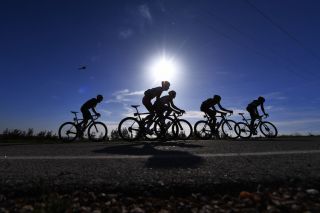 One of the raft of races making up part of the new ProSeries category, the Volta ao Algarve is perhaps the premier early season European test. Now in its 46th edition, the race has evolved from primarily a domestic affair – won twice by the current Volta a Portugal director Joaquim Gomes – into a key event for much of the WorldTour.

Held in October and then May in the 1960s and 1970s, the race has gradually shifted earlier in the calendar, finally moving to its current mid-February date in 2001. The final shift heralded an ever-greater influx of foreign top level teams, to the extent that only three Portuguese riders have won since, with Cândido Barbosa the most prominent among them.

Alberto Contador's victories in 2009 and 2010 opened the floodgates further, with Grand Tour specialists accounting for most of the race's victories since then. Richie Porte, Geraint Thomas (twice) and the Slovenian duo of Primož Roglič and Tadej Pogačar have been notable winners in recent years.

It was Pogačar who triumphed last year, beating Søren Kragh Andersen by six seconds overall, having taken his first pro win earlier in the week on the slopes of the Alto da Fóia. The then 20-year-old went on to enjoy a neo-pro season to die for, winning the Tour of California and three Vuelta a España stages before taking third overall in Madrid.

The peloton went Dutch on the two sprint stages, with Fabio Jakobsen and Dylan Groenewegen splitting the honours as the likes of Arnaud Démare and Pascal Ackermann trailed in behind. Meanwhile, Stefan Küng won the mid-race time trial in Lagoa, now situated on the final day for potential added drama. QuickStep bookended the race with a Zdenek Štybar's win on the Alto do Malhao.

Neither Pogačar nor Kragh Andersen return to the race this year, leaving a wide-open field for the overall title. Only two former winners will take the start, with Team Ineos giving two-time winner Geraint Thomas his season debut while Michał Kwiatkowski, victor in 2014 and 2018, will line up in Portimão too.

The pair will be joined by new signing Rohan Dennis, fresh from the Tour Down Under. Set to be among the strongest teams at the race, Ineos should challenge for the top spots – Thomas took second behind Kwiatkowski two years ago despite it being the first race of what turned out to be his Tour de France-winning campaign.

Dan Martin will take the start of his second race for Israel Start-Up Nation, having finished fourth at the Volta a la Comunitat Valenciana earlier this month. The Irishman won the stage to Alto da Fóia in 2017, so should be in contention this year.

Speaking of big-name riders on new teams, Vincenzo Nibali begins a big year in the Algarve. Set to target the Giro d'Italia and Tokyo Olympics gold in 2020, the Italian will kick off his campaign with the support of his brother, Antonio, while 2019 Il Lombardia champion Bauke Mollema will be looking for a continuation of his late-season successes.

Deceuninck-QuickStep's Remco Evenepoel faces the biggest GC test of his short career. The 20-year-old won the Vuelta a San Juan, but this is a step up considering the strength of the field.

Rui Costa (UAE Team Emirates) began his season with a stage win at the Saudi Tour, ending up third overall at the race. He's the biggest Portuguese name at the start but has yet to win a stage here, and hasn't raced since 2014, where he finished third overall.

Finally, Bora-Hansgrohe bring several options in the form of Max Schachmann and Felix Großschartner. The duo finished seventh and eighth in 2018, while new signing Lennard Kämna, so impressive for Team Sunweb at last year's Tour de France, will be another top-10 challenger.

With only two nailed-on sprint stages at the race, and the opening stage complicated by a hilly finish, the sprint field isn't the strongest of the year. Elia Viviani (Cofidis) is the biggest-name sprinter on the start line. He'll be looking for his first win with his new team and takes key lead out men Fabio Sabatini and Simone Consonni to Portugal.

Alpecin-Fenix are at the race and bring their star man Mathieu van der Poel. The 7km summit finish of the Alto da Fóia will complicate a GC bid, though the Dutch prodigy looks capable of widening any of the other four stages.

Fabio Jakobsen is Deceuninck-QuickStep's sprint hope, having won a stage at Valencia, and while John Degenkolb will miss the race through illness, Philippe Gilbert will give Lotto Soudal an option on stage 4's uphill finish in Malhão.

The opening stage heads from Portimão to Lagos, only a 10km trip down the coast in reality, but with a 185km loop to the east added on to make it a touch more challenging for the peloton.

Two climbs (third and fourth category) come early in the stage, while three sprints along the way are more indicative of the likely stage outcome. One complicating factor for the sprinters could be the 0.6km, 3.6 per cent hill crested just 2km from the line, though the relatively gentle slope shouldn't be a huge challenge.

Stage 2 is the big test of the race, the now-traditional summit finish at the Alto da Fóia. Since its introduction in 2016, the climb has been decisive on each occasion, with the eventual overall winner finishing either first or second on the stage.

Running 184km from Sagres to the summit, there are three climbs along the way (two third category and one second) dot the route, though the 6 per cent slopes of the 7.4km are by far the toughest of the day. Succeed here, and you could just be on the way to overall victory.

A straightforward sprint stage – perhaps the only one of the race – follow the next day. The 202km ride from Faro to Tavira features two categorised climbs early on, though the finale is largely flat and uncomplicated. The kilometre-long, slightly uphill finishing straight in Tavira should see a true head-to-head battle among the sprinters.

Stage 4 concludes with another uphill finish, this time on the short but steep Alto do Malhão. The second of three GC days in the race, the 170km stage from Albufeira is, once again, all about the finish.

A second category climb some 25km from the line presents the major challenge along the way. However, it's the three kilometres up Malhão, featuring a changeable gradient which reaches double digits in places for an average of 9.4 per cent, which will shake up the GC once more.

The fifth and final day of the Volta ao Algarve brings the peloton to Lagoa, back near the start in Portimao. Since 2014, the race's short time trial has been held midway through on stage 3, but the organisers have shifted it in order to provide a grand finale to the 2020 edition.

Only one of the last four editions (Kwiatkowski's dominant 2018 win) has seen the top two separated by over 30 seconds, which mean a 20km time trial to round things off could see the drama extend all the way to the line.

It's a largely flat course, though not without some lumps along the way, and unchanged from the past two editions. Last year's winner Stefan Küng (Groupama-FDJ) should be in contention again, then, along with the likes of Ryan Mullen (Trek-Segafredo), Yves Lampaert (Deceuninck-QuickStep) and the men at the top of the general classification.