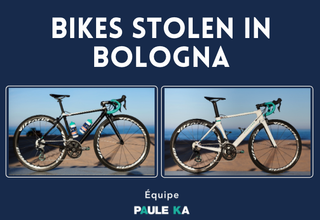 Equipe Paule Ka have been forced to withdraw from the Giro dell'Emilia Internazionale Donne Elite after thieves stole seven team-issued CHAPTER2 bikes in Bologna on Sunday. The team announced that they are offering a €5,000 reward for the safe return of their bikes.

"It is with regret that we announce the withdrawal of Équipe Paule Ka from tomorrow’s Giro dell’Emilia," the team stated in a press release.

"Following the theft of our CHAPTER2 HURU and RERE bicycles from the team hotel in Bologna, there was insufficient time to replace the bicycles ahead of the event. Team management has decided there is therefore no other option but to withdraw from the race."

Giro dell’Emilia is a 1.Pro race to be held between Bologna and San Luca on Tuesday. Many of the participating teams arrived in Bologna several days in advance of the race to train and prepare for the event.

The team woke up to find that their bikes were stolen from the Amatì Design Hotel, Via Rigosa, 14 Zola Predosa, 40069 Bologna BO, Italy, on Sunday.

"This recent series of events has left everyone in the team extremely dismayed and frustrated, and we once again call upon anyone with information about the whereabouts of our bicycles to please contact us. We are still offering a reward of €5000 for their safe return. All details can be found here in our press release from earlier this morning," the team stated.

The team urges anyone with details or leads to please get in contact via Email: press@equipepauleka.com, WhatsApp: +61 490 287 669 or Direct Message on Social Media: @Equipe_PauleKa.

📝 TEAM NEWS: It is with regret that we announce our withdrawal from tomorrow’s Giro dell’Emilia following the theft of our bicycles.Further information here: https://t.co/MPpssd8zN8 pic.twitter.com/cXznq6F5KhAugust 17, 2020