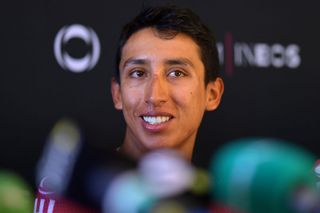 Egan Bernal has been named in the Colombian squad for the World Championships in Yorkshire, with the Tour de France winner likely to play a supporting role for sprinters Fernando Gaviria and Álvaro Hodeg.

Also named in the eight-rider squad are Nairo Quintana, Esteban Chaves, Sebastián Molano, Sebastián Henao and Dani Martínez. Miguel Ángel López, who finished fifth in the Vuelta a España, is not in the squad.

Although the 22-year-old will be representing his country for the first time at a road world championships in Yorkshire, he has taken part in the UCI Mountain Bike World Championships, in 2014 in Norway, where he won silver for Colombia in the junior men’s cross-country.Bernal has spent much of the last two months at time in Colombia and has recently increased his road training.

Bernal is expected to return to racing this week in Italy at the Giro della Toscana on Wednesday and then ride the Coppa Sabatini near Pisa on Thursday and the Memorial Marco Pantani at the weekend.

After racing in Yorkshire, Bernal will head to Italy according La Gazzetta dello Sport. Following largely the same programme as 2018, he’ll race the Giro dell’Emilia, GP Bruno Beghelli, Tre Valli Varesine and Milano-Torino before ending his season with Il Lombardia.

While the Worlds road race on September 29 may not to prove hilly enough for the 60kg climber, various reconnaissance trips by the likes of the Belgian and Italian national teams have confirmed that the 284.5km race is tougher than was first thought.

The 2019 UCI Road World Championships get under way on September 21 with the para-cycling road races in Harrogate, and culminate with the elite men’s road race on September 29.

Cyclingnews will have full coverage of all the action from Yorkshire.