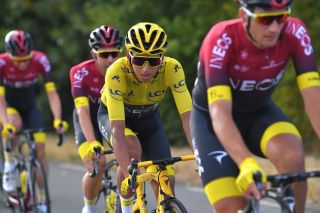 Egan Bernal has reiterated his claim for a leadership role at Team Ineos for the Tour de France, predicting that 'we'll see right from the opening stages who is the strongest'.

Bernal also said he is keen to ride Strade Bianche if racing returns on August 1 and wants to focus solely on the Tour de France in 2020 so he can be fresh for a possible Giro d'Italia-Tour de France double in 2021.

Bernal became the youngest Tour de France winner in more than 100 years when he triumphed last year, with 2018 winner Geraint Thomas forced to settle for second place after Bernal emerged as strongest on the shortened stage 19 over the Col d’Iseran.

Both Bernal and Thomas will target the Tour once again this year, along with four-time winner Chris Froome, who is taking advantage of the postponement of the race to late August to complete his return to form after his crash at last year's Critérium du Dauphiné.

Froome and Thomas have openly talked about wanting to win the Tour de France and Bernal has also begun to jostle for leadership after the new race dates were confirmed. Last week Bernal told Eurosport España, that if he was at his best he wouldn’t "throw away an opportunity to win another Tour de France".

Speaking to Italian television on Sunday evening, he acknowledged Thomas' and Froome's claims to leadership but was keen to reiterate his status as 2019 winner and predicted the early stage of the Tour de France in the south of France could spark the first internal battle for team leadership.

If the French government and local authorities deem it is safe to race, the Tour de France is due to start on Saturday, August 29 in Nice and in Paris on September 20. Stage 4 to Orcières-Merlette ends with a 7km climb at 6.7 per cent. Stage 6 to Mont Aigoual includes the 11.7km Col de la Lusette, which has a two-kilometre section near the summit at 11 per cent.

"For sure it'll be the road that decides," Bernal told La Domenica Sportiva show via live video link-up from Colombia, where he is staying during the COVID-19 pandemic.

"I clearly understand Froome's intentions to try and win a fifth Tour de France; if he wins a fifth Tour, he'll be part of the history of cycling, even more than now. Thomas has finished first and second in the last two editions of the Tour, so for sure he's got to have his chance too. But of course, I'm the last winner of the Tour de France. I'm young but I want to win my second Tour de France and that's what I'm working for. The team knows that and those two know it.

Bernal has recently begun to train outdoors after the major of Zipaquirá gave special permission to local professional riders. Colombian President Iván Duque extended the permission to include all Colombian professional riders from today. Bernal is expected to return to Europe several weeks before the start of the revised calendar in August to avoid the problems of any formal quarantine. He will have noticed that Thomas travelled from Wales to his base in Monaco today to step-up his training for the Tour de France.

Thinking about the 2021 Giro d'Italia

Bernal said he will discuss the details of his race programme and build-up for the Tour de France with Team Ineos this week. He had planned to ride both the Tour de France and Vuelta a España in 2020 but has now changed his plans, revealing he will now only ride the Tour de France so that he can be fresh for the Giro d'Italia in 2021 and perhaps even an attempt at the Giro-Tour double.

Bernal lived in Italy for two years during his early years as a professional with the Androni Giocattoli team and is keen to return to Italy to begin his revised 2020 season at Strade Bianche on August 1.

"I don’t know my programme for before the Tour de France yet. I'll soon speak to the team and my coach to understand the races I'll do. For sure I'd like to do some races in Italy because I've raced there a lot, I know the roads and the race routes," he told La Domenica Sportiva.

"I'd really like to ride Strade Bianche. I've wanted to ride it since I turned professional but I've got to see what the team thinks, they know how to perform well at the Tour de France and so I have to see what they say. We'll see.

"Before the coronavirus, I thought about riding the Tour and the Vuelta but now I'm not sure about doing two Grand Tours because next year I'd like to ride the Giro d'Italia. I've wanted to ride since I was at Androni, I raced in Italy a lot but never the Giro. So thinking about next season, it'd be better to do just one Grand Tour this year, to be fresh for the Giro d'Italia in 2021."