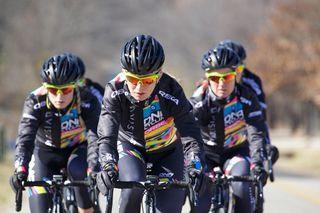 Lauren De Crescenzo, a former pro that now works as a research assistant at the Centers for Disease Control (CDC), has broken the Everesting women's record climbing Hogpen Gap in Georgia a total of 24 times in 9 hours and 57 minutes. The American beat previous record holder Katie Hall's time by roughly four minutes.

"Yesterday was the hardest thing I’ve ever done in my whole life," De Crescenzo said in a report published on VeloNews. The report noted that her effort was to raise funds for Craig Hospital, the place where she received treatment after a traumatic brain injury four years ago.

De Crescenzo was injured in 2016 in a crash at the San Dimas Stage race. Racing for the Visit Dallas-DNA team at the time, she spent more than a week in intensive care before recovering at the Craig Hospital, a world-renowned center for spinal cord and brain injury rehabilitation.

"My favorite charity of all time is Craig Hospital because of all the time I spent there," she says. "When he [her fiancee Jim] told me about his idea, I was like, ‘Craig! I can raise money for them, plus I’m gonna have FOMO.' I had to do it."

De Crescenzo climbed an elevation of 8,848 metres in the space of 179km on Sunday using the short side of Hogpen Gap, a climb that has a 9.83 per cent average gradient. She told Velonews that her average power was 193, and said it was twice as much climbing than she had ever done.

Riders have been Everesting, officially run by Hells 500 out of Australia, by riding 8,848 vertical metres - the height of Mount Everest - as fast as possible using just one climb.

On Memorial Day Weekend, Hall set a new women's record climbing 8,848 metres elevation in 10 hours and one minute on the Bonny Doon ascent outside of Santa Cruz, California, Before that, the previous women's record was more than 12 hours (12:32) set by Alice Thomson from the UK.

Emanuel Buchmann (Bora-Hansgrohe) initially broke that record climbing 8,848m in 7 hours 28 minutes using an 11.6km ascent near Ötztal, Austria, however, that was later ruled out due to technical rule breaks.

Other riders who have completed the Everest Challenge are Ruth Winder (Trek-Segafredo) and James Piccoli (Israel Start-Up Nation).