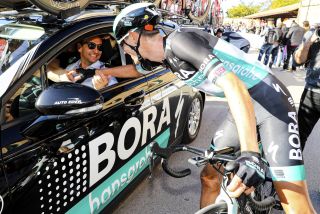 Tour de France contender Emanuel Buchmann saw his Everesting attempt ruled out due to technical rule breaks after the German and his Bora-Hansgrohe team had initially declared that they had set a new record.

Bora and Buchmann had declared that they had set a new record for ascending 8,848m – the height of Mount Everest. Buchmann finished the challenge in just over seven hours and 28 minutes, 14 minutes faster than US mountain bike champion Keegan Swenson. However, Andy van Bergen, from Hells 500 – who oversees the challenge and all the subsequent record attempts, confirmed to Cyclingnews via email that Buchmann’s effort would not stand and that Swenson still held the record.

“We look at elapsed, not moving time. It’s a shame this rule wasn’t adhered to because it’s a simple one, but the ride has to be repeats of the same section of hill, and his first repeat was on the other side of the mountain. It’s a real shame because it looks like it would have been very close!”

Buchmann’s elapsed time was in fact seven hours and 51 minutes and was over ten minutes slower than Swenson's. Buchmann also failed to use the same ascent for the entirety of his ride.

The 27-year-old, who finished fourth overall in the 2019 Tour de France, took on the challenge with the goal of raising €10 for each vertical metre climbed for Deutsche Kinderhilfswerk, an organisation that benefits disadvantaged children.

Buchmann's ride, uploaded to Strava, shows he covered 162.19km, climbing at a VAM of over 1,500 m/h at times and reached a maximum speed of 75.3kph on a descent. However Buchmann started climbing from Oetz then descended the other side toward Haimingerberg and doing eight repeats of the steeper side.

"That was one of the hardest things I have ever done," Buchmann said in a team press release. "I didn't think it would hurt so much towards the end.

"At the beginning, I found a good rhythm and then decided to push hard. After 7000m of climbing completed, I started feeling my muscles. I am not used to this amount of workload and it started to hurt a lot. The last 1000m have been cruel. But there were also some fans out there and their support pushed me toward the finish.”

Buchmann is the latest in a series of riders to take on the Everesting Challenge, with American Katie Hall setting the fastest known women's time at just over 10 hours.