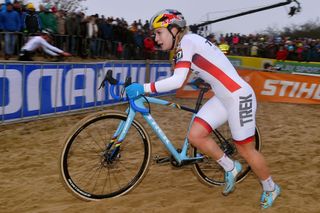 After missing the end of last year's cyclo-cross season due to a knee operation, Evie Richards is targeting a successful end to this term.

The 22-year-old British rider, who has two under-23 cyclo-cross World Championships crowns to her name, missed the chance to retain her title last season in order to have surgery to correct a knee injury.

This year, Richards has returned to form in preparation for a mountain bike Olympic dream place in Tokyo next July. Storming back from surgery, the British rider clinched three podiums at under-23 level at the mountain bike World Cup this season before taking victory in the final round at the Snowshoe resort in West Virginia in September.

A week later, Richards was in cyclo-cross action with a fifth place in the elite women's category at the opening round of the World Cup in Iowa City before taking third place in the following round at Waterloo eight days later.

"I was just so exhausted by the time I got to those as I'd been on the road for 10 weeks," said Richards. "The first one was really hard to get through having not been on the 'cross bike for a year, but when I went and raced in Waterloo it was amazing.

"I got my rhythm back on the 'cross bike, had some better nights' sleep, and it was perfect," she said.

Richards clinched her first elite cyclo-cross World Cup victory in Namur in 2017 and is bidding to back for this year's event on December 22.

Last season, Richards had an earlier break and returned to international competition for the November World Cups at Tabor and Koksijde, before her injury halted her season.

"We'll be back for the Namur World Cup because that's my favourite,” said Richards. "But obviously with my later break this year, it's going to be a shorter 'cross season, from my knee dragging on and delaying everything.

"I'll probably be back racing in Belgium in December, and will then do Namur, the national championships, and Hoogerheide and those end-of-season ones. I've still got a fair few to do," she said.

February's UCI Cyclo-cross World Championships in Dübendorf, Switzerland, will be Richards' first Worlds at the elite level. The course is expected to be flat and unlike the circuits on which Richards won both world titles at under-23 level.

Richards added: "I'll do the World Championships as a first-year elite, and I know it's probably not going to be my favourite course this year, but it will just be good fitness for hopefully the Olympics next year as well.

"It's just about riding through 'cross this year and then hopefully doing a full season next year."

After a break from the sport in recent weeks, Richards returned to cyclo-cross action this past weekend, winning a regional race close to her Malvern home in Worcestershire in the UK.

The British rider helped to design the circuit, which included technical descents and a muddy wooded section to test riders' strength.

Despite only returning to training a handful of days before the event, Richards put in a commanding ride to win the local event by almost three minutes, lapping all but eight riders in the process.

"I rode from the front and rode my own race," explained Richards "I've only been back on my bike for five days, so being back on the bike and riding hard... It's just nice to be back pedaling. I love the local races, and it's so nice to see the kids and so many people racing.

"I should be back doing a couple more, and hopefully if the weather stays OK, I'll be training in the UK until December and will be at a few more of the local races," she said.