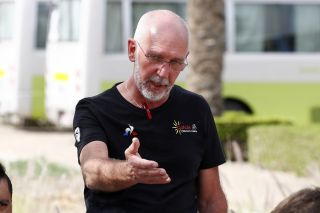 In correspondence sent to, and published by, Italian cycling website TuttoBiciWeb.it on Sunday, Cofidis sports director Roberto Damiani said that he was prepared to go on hunger strike in protest at him and his French squad being one of only three teams still being prevented from leaving their Abu Dhabi hotel, in the United Arab Emirates, due to fears of the coronavirus.

The UAE Tour, at which Damiani's Cofidis team were competing, was cancelled following stage 5 of the event on Thursday evening, despite there being two stages remaining, with riders, team staff, race organisation staff and journalists being confined to their hotels after two staff members of one of the teams taking part were reported by the organisers as having tested positive for the virus.

There are now doubts as to whether those members of staff actually did test positive for the coronavirus, but a fourth team – the UAE Team Emirates squad – has decided to remain at the hotel for the time being due to "some known cases of flu within our group and other teams", explaining in a statement on Sunday: "Despite being given the green light to travel home, and the last tests carried out coming back negative, our team has decided to extend their stay in the UAE to continue testing everyone's conditions and go home only with the safety of non-contagion."

Meanwhile, Cofidis, Groupama-FDJ and Gazprom are believed not to have yet been allowed to leave, pending further tests, while, in turn, other teams who have tested negative have been permitted to go.

In his letter to TuttoBici, Damiani wrote: "I believe that we have now passed the limit of decency, albeit in the name of public health and the danger of contamination. You already know what has happened in recent days, but to date only the members of three teams have been forced to stay in their rooms for fear of coronavirus infection.

"I want to clarify that the Cofidis team has never had any problems and that we have been confined here to the fourth floor, with the other two teams, without it having been taken into consideration that for a week, at least, about 500 people have met [on the race] and stayed together for several hours a day," he pointed out.

"I must say that RCS, as an organiser [RCS Sport – race co-organiser], is doing everything it can to solve the problem, but they, too, seem to be coming up against a brick wall.

"If, in the next few hours, the situation doesn't improve," Damiani added, "I will start a hunger strike to at least defend the riders and staff members for whom I am directly responsible at this race."

On Sunday evening, Cofidis general manager Cédric Vasseur took to social media to convey his continued support for his riders and members of staff.

"My thoughts are with those members of Cofidis still stranded in Abu Dhabi, having been there since Thursday evening," Vasseur wrote on Twitter. "Hoping for their repatriation as soon as possible."

While Damiani's frustration at the team having to continue to remain at their hotel was clear, and understandable, two of the Italian sports director's Cofidis riders, Nathan Haas and Attilio Viviani, tried to make light of their situation by creating a video of some homemade exercises to perform to try to maintain their fitness while stuck in the hotel, published on YouTube on Sunday by cycling website The Peloton Brief.