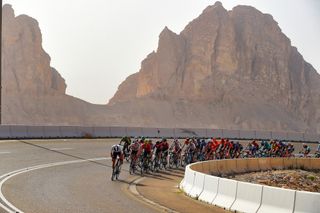 The peloton on stage 5 of the UAE Tour (Image credit: Bettini Photo)

With the UAE Tour cancelled and the race hotels on lockdown until tests on riders, staff, organisation and media have been completed, the news and reaction coming from the race – including rumours spreading on social media – have gradually emerged, recalling the events of the last 24 hours.

The final two stages of the race were cancelled and Adam Yates (Mitchelton-Scott) confirmed the winner. Teams have been stuck in their hotel rooms at the Crowne Royal Plaza Abu Dhabi Yas Island, as have other members of the race organisation and the media. All have been tested for the coronvirus with results expected during Friday and Saturday.

Some reports of the atmosphere in the race entourage have gotten through, with Deceuninck-QuickStep boss Patrick Lefevere, Lotto Soudal directeur sportif Mario Aerts, and several members of the Jumbo-Visma squad giving updates on the ongoing situation.

"The rumour hadn't circulated during the day – the news came very unexpectedly in the evening," Aerts told Het Nieuwsblad of the outbreak news.

"I stayed awake until four in the morning. In the end they visited our team at 6am.

"With a cotton swab, they took nasal mucus and temperature was taken in our ears. Now we have to wait for news. The results should be known later on Friday. Then we know if we can actually go home on Sunday.

"Everyone is calm. It's a bit annoying that the race has stopped, but all in all it's not so bad here. There are worse places and hotels to stay in quarantine."

Lefevere, who is in Belgium, was worried about his team having been in contact with staff members at UAE Team Emirates, the team to which the two ill staff members reportedly belonged. The team has yet to confirm the two cases.

"In countries such as the UAE, all teams are in one hotel," he told Het Nieuwsblad. "There has been a lot of contact between UAE Team Emirates and my team. We have been tested this morning and it takes a few hours for the results to be known. In the worst case, the riders will have to stay in their hotel for 14 days."

Jos van Emden, road captain at Jumbo-Visma appeared critical of the testing conditions, noting that everyone to be tested was held close together in a small corridor, potentially aiding the spread of the virus.

"On the second floor in a narrow corridor. Everyone was within half a metre of each other. If someone was sick there, then we all have it now," he told AD.nl.

"I hope it will be over soon. The [infected] will feel terrible, because 500 people are trapped in a sandbox where they are not allowed to leave."

Van Emden also described the situation inside the hotel, with riders being forced to stay in their rooms and being sent away from the outside terrace.

"Our freedom of movement is limited. We don't have to stay in our rooms, but I understood there are armed people at the door. Dylan [Groenwegen] and Timo [Roosen] were sent off the roof terrace this morning. They wanted to sunbathe but were sent away."

Meanwhile, Grischa Niermann, a coach at the team, was hopeful that Jumbo-Visma wouldn't have to stay in the hotel for two-weeks – the self-isolation period for anyone found to have come into contact with those confirmed as positive with the coronavirus.

"The planes fly over the Formula 1 circuit next to the hotel. I'm sitting on a terrace now, but we cannot leave here," he told AD.nl. "It's not the best situation, but everyone feels fit and healthy. We're just isolated.

"I hope that we can leave soon. If we have to stay for two weeks, I'll hang myself. Although there are worse places. This is not a Campanile hotel in a deserted part of France. But still, we're locked up."

Dutch journalist Raymond Kerckhoffs told Sporza that riders were largely in good spirits about the situation and are not worried about the virus as they waited for the test results.

"I have contact with riders via mobile phone," he said. "They are more likely to laugh about the virus, and they don't worry. Still, the atmosphere is getting more and more grim. That's because of the many ambiguities and the big question: how long do we stay here?"

"It's true that the riders had to sign a paper when they were tested. It says that they can't talk to the press and can't post anything on social media, but of course that can't be maintained. We journalists are here too, and the riders keep us informed."

Results of the coronavirus tests are currently filtering through to those affected, with more to come later in the afternoon.

ISN updating the #coronavirus situation in the #UAETour : Our directors briefed the riders that so far the virus tests for the teams are NEGATIVE although not yet completed. Expected final results: In couple of hours.fingers crossed🤞.February 28, 2020

I understand 600 people at #UAETour will be tested for #coronavirus including 120 from my hotel. Tests underway here now. Told it will take about 6 hours to finish testing, with results expected 6-9 hours thereafter. Riders, team staff may know sooner as they were screened first.February 28, 2020