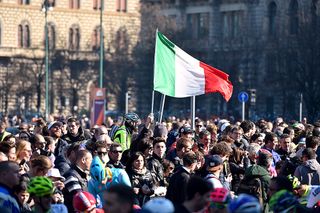 The organisers of Strade Bianche, Tirreno-Adriatico, and Milan-San Remo are set to be forced to cancel the races after the Italian government called a halt to all sporting and public events for a month in an attempt to limit the spread of the coronavirus Covid-19.

RCS Sport had still been planning to put on the men's and women's editions of Strade Bianche and next week's Tirreno-Adriatico stage race because they are in central Italy, away from the northern regions of Lombardy, Veneto and Emilia-Romagna where the virus has taken hold.

Instead, the organisation will be forced to reschedule the events at a later date, if possible. On Wednesday night, RCS Sport issued a statement noting that the Gran Fondo Strade Bianche had been cancelled, and that updates regarding its group of five upcoming races would be issued in the coming days, while consultations with the appropriate authorities would commence on Thursday morning.

The move follows a drastic new measure introduced by the Italian government on Wednesday evening. In order to help fight the spread of coronavirus, the decree includes a halt to all public and sport events which cannot be held in a closed arena, and the closing of schools and universities for a month.

"Sporting events and competitions of any order or discipline, carried out in any place, public and private, are suspended," reads the decree.

"However, the holding of events and competitions, as well as the training sessions of competitive athletes, inside sports facilities behind closed doors, will be allowed. In all cases, sports associations and clubs are required to carry out appropriate checks to limit the risk of spreading the Covid-19 virus."

The Italian government's drastic decision means that some sporting events held in closed arenas – such as Serie A football matches – will be allowed to take place, but the nature of road racing means it is virtually impossible to limit contact between riders, the public and amongst race staff.

The decree will stop the running of the RCS Sport races men's and women's Strade Bianche (March 7), Tirreno-Adriatico (March 11-17), Milan-San Remo (March 8) and the Tour of Sicily (April 1-4),  as well as the GP Larciano [Industria & Artigianato] (March 8), Popolarissima (March 15), the elite and junior races at the Women's WorldTour Trofeo Alfredo Binda (March 22) and the Settimana Coppi e Bartali (March 25-29).

Italian authorities confirmed on Wednesday evening that the number of positive tests for the coronavirus has risen to 2,703, with 107 deaths and 295 people in intensive care in hospital, while at least 276 people have fully recovered from the virus. More than 80 per cent of the cases are in the northern Lombardy, Veneto and Emilia Romagna regions, but further isolated cases are being discovered across Italy hour by hour.

Due to the risk of the coronavirus, a number of teams already said they would not travel to Italy, with Mitchelton-Scott also announcing that they would skip Paris-Nice and the women's one-day races Ronde van Drenthe, Danilith Nokere Koerse and Trofeo Alfredo Binda.

Earlier on during a day full of coronavirus updates, 14 doctors from several teams – led by those from EF Pro Cycling – called for teams to avoid racing due to a lack of a 'robust plan' by the UCI and race organisers to address concerns about the spread of the coronavirus.

The UCI has since announced that, while they refused to cancel races, race organisers must take a number of measures with the aim of limiting the risk of the coronavirus spreading further.

Such measures include increasing the distance between the public and riders, particularly in the start and finish zones and the respecting a strict medical protocol, and limiting the number of teams staying in the same hotel.

The UCI added no team would be penalised financially, or when their sporting results are considered in rankings, if they are unable to take part in an event for a valid reason.

RCS Sport's Mauro Vegni said earlier on Wednesday that he hopes the Italian races could take place on a later date in the 2020 season, rather than potentially be cancelled from the calendar altogether.

"We intend to work alongside the UCI to find new slots in the calendar for these races, which we absolutely don’t want to lose," Vegni said. "We've got an alternative plan so the races aren't lost. They could be held after the Giro d'Italia in June or even in September."

Teams, several of which already stated that they would pull out of the Italian races, now face difficult decision about taking part in other March races on the calendar, including which riders will take part in Paris-Nice, should the French race go ahead.