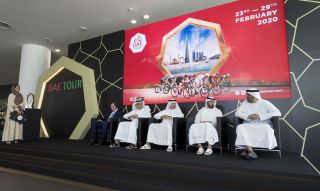 The Union Cycliste Internationale (UCI) has said it has been informed that six further cases of the coronavirus have been discovered amongst teams at the UAE Tour. The six cases are further to the original two cases that emerged last week and involved two staff members of a team in the WorldTour race.

On Wednesday La Gazzetta dello Sport reported that a total of 12 cases have been discovered in the UAE Tour entourage, with four riders affected and taken to hospital for medical support.

The Cofidis and Groupama-FDJ teams have confirmed their riders and staff have all tested negative but further testing appears to have discovered more cases amongst riders and staff of the Gazprom-RusVelo and UAE Team Emirates teams who were obliged to stay in the UAE after the initial cases were confirmed.

La Gazzetta dello Sport, owned by the same company as UAE Tour organiser RCS Sport, reported that the four riders said to be positive for the virus include two Russians, an Italian and a Colombian.

The UCI did not identity the four riders positive for the coronavirus. However, Fernando Gaviria is suspected of being one of them. Only two Colombian riders were at the UAE Tour and Hernando Bohórquez of Astana has been allowed to leave the country. Gaviria's family in Colombia told the El Tiempo website that they have no information about him and have been unable to talk to him. Gazprom rider Igor Boev has confirmed to Russian media that he is in a UAE hospital.

The UCI confirmed that the Emirates health authorities have decided to keep everyone confined to the fourth floor of the team hotel - namely members of Cofidis, Groupama-FDJ and Gazprom-Rusvelo - in quarantine until at least 14 March.

"They will undergo more tests in order to ensure they are in good health. Meanwhile, the infected people have been taken to a hospital where they are benefitting from close medical monitoring," the UCI said.

"We are in contact with the authorities in the UAE to be sure that the teams – riders and staff – in quarantine are held in the best possible conditions (including good-quality food and regular cleaning of their rooms), and notably that the athletes have the necessary equipment (home trainers in particular) to continue training with a view to a return to competition before long."

The UCI added: "We continue to closely follow the situation and is committed to ensuring that all those concerned can return home as soon as possible. It is also taking care that there is optimal communication with the concerned teams so that they are informed on a daily basis of the evolution of the situation."

The UCI thanked the teams being held in Abu Dhabi "for their patience in this difficult situation and for their contribution to the fight against the spreading of the coronavirus, and lends its support to them in this context which is critical for the world’s population, including for members of the cycling family."