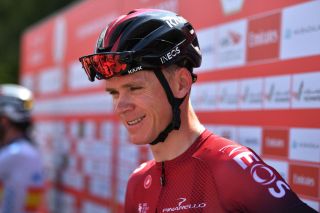 Chris Froome will face a test of his Tour de France credentials next week as he makes his return to racing at the Route d'Occitanie.

The presence of the four-time Tour de France champion was announced on Monday by the organisers of the four-stage French race, which begins on Saturday August 1.

Froome, who will leave Team Ineos at the end of the season, is expected to be joined on the start line by Egan Bernal, although the Colombian's participation has yet to be officially confirmed by the race or by Team Ineos.

Boonen: If anyone can dismantle Ineos, it's Chris Froome

Geraint Thomas, the third member of Team Ineos' leadership trio, will make his season return at the Tour de l'Ain, three days after the conclusion of the Route d'Occitanie. Both Froome and Bernal could also line up at the three-stage race, while all three are set to race together at the Critérium du Dauphiné.

The limited amount of racing on offer in the build-up to the Tour de France could prove crucial to establishing something of a hierarchy at Ineos, who are lining up with the past three yellow jerseys.

In late May, following news of a possible mid-season transfer for Froome and comments from Bernal suggesting he wouldn't sacrifice his own chances, Team Ineos issued a statement to Cyclingnews saying a decision on leadership would be made once the season had resumed.

"All have shown they are capable of leading the team and all are encouraged to prepare to do so," said a spokesperson.

"We know a lot changes in our sport and a final decision on roles will be made closer to the time when more information is available about each rider’s form, fitness and which best fits the overall team strategy."

This weekend, Bernal sought to pedal back on the idea he wouldn't work for Thomas or Froome, repeating the line that the 'road will decide' the hierarchy. After months without racing the Route d'Occitanie will see Froome and Bernal measured directly against one another.

It will also reveal how Froome's fitness is progressing after his comeback from a career-threatening crash last June, and whether his claims that he's back to his best  are accurate.

While Froome's ability to lead the line remains up in the air, the same may be true for his very selection. Following the announcement of his move to Israel Start-Up Nation from 2021, there has been speculation that Ineos may opt to do without him, with a number of experts saying three leaders is too many.

The rescheduled Route d'Occitanie features one big mountain stage in the Pyreneees, with the riders tackling the Porte de Balès and Col de Peyresourde ahead of a summit finish on the Col de Beyrède (10.9km at 7.2 per cent). The opening stage is one for the sprinters, with stage 2 a slightly more undulating affair, while the final stage is one for the puncheurs with a steep final climb (1.1km at 10 per cent) to the line.

The 21 teams who will contest the race were announced on Monday, with Ineos one of eight WorldTour teams, along with AG2R La Mondiale, Astana, Bahrain McLaren, CCC Team, Cofidis, Groupama-FDJ, and Trek-Segafredo.