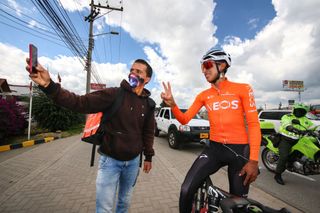 Sunday ought to have been the final day of the 2020 Tour de France, but rather than pedalling along the Champs-Élysées, Egan Bernal finds himself aboard a charter flight from Bogota to Madrid with his fellow Colombian professional riders.

Bernal has been in Colombia since the coronavirus pandemic interrupted the season in March and he will resume his campaign at La Route d’Occitanie (August 1-4) and then ride the Tour de l’Ain and the Critérium du Dauphiné before lining up at the rescheduled Tour de France, which gets underway in Nice on August 29.

The 2019 Tour champion was feted at a ceremony the Salt Cathedral of Zipaquirá on Thursday, where mayor Wilson García Fajardo presented him with the flags of his native city and of the department of Cundinamarca ahead of his departure for Europe.

“I don't promise to win the Tour de France, but I do promise to do my best,” Bernal said, according to El Tiempo.

It was confirmed last week that Chris Froome will leave Team Ineos to join Israel Start-Up Nation in 2021, though the Briton is aiming to line out at this year’s Tour alongside Bernal and Geraint Thomas.

“He is a champion. He wants to win – to be a leader, to go to a race and blow it up. That’s something to admire,” Bernal said of Froome. “Next year he will be a rival and it will be difficult to compete against such a top-level rider. But he’s still a teammate, a friend and, on this Tour, he'll still be with us.”

Bernal added that he had paid scant attention to speculation regarding the hierarchy of Team Ineos at La Grande Boucle, with both Thomas and Froome – winners of the previous two Tours – making no secret of their aspirations of claiming another maillot jaune.

“Many people don't believe me, but I don't listen to what’s being said,” Bernal said. “The place to do your talking is on the bike. What they say may be taken as psychological warfare or not, but I’m just staying isolated, training well, and getting to the races in Europe in the best way. I'm not a fan of watching a lot of news, that can be counterproductive.”

Although Ineos currently look set to field three potential leaders in an eight-man selection at the Tour, Bernal insisted that the situation was more straightforward than it seemed. Performances in August races, he suggested, would decide the team’s strategy ahead of the Grand Départ.

“It’s not complicated. It's about getting to the races before the Tour and showing that I'm in good shape,” Bernal said. “The team has a lot of experience of preparing to win the Tour and they will know from the first races who is going better. Ineos pays me to race with them. If I have to work for the others, I'll do it, and they'll do the same. In cycling, you can't lie, and you'll know who's going better.”

Bernal will travel to his European base in Andorra on arrival in Europe ahead of a short and condensed calendar of races. “There are few races to do well, so I think there will be quite a high level,” he said.