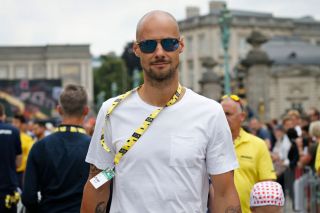 Tom Boonen believes that Chris Froome has given himself the best possible chance of equalling the record of five Tour de France victories by choosing to leave Team Ineos and join Israel Start-Up Nation.

This week it was announced that Froome will leave his 11-year home at the end of 2020, with Ineos saying they were unable to guarantee him a clear leadership role at the Tour de France.

Despite Froome having won four Tours, Ineos have won the last two through Geraint Thomas and Egan Bernal, the latter's victory coming last year when Froome was sidelined with a career-threatening injury.

For Boonen, the seven-time Monument champion, Froome had to avoid playing second or third fiddle in the remaining years of his career.

What bike will Chris Froome ride in 2021?

"It is certainly not an unwise move," Boonen told Het Laatste Nieuws. "No matter how realistic the chances of failure seem, with this switch he makes them just a little smaller, by eliminating one possible important nuisance factor: internal competition.

"Ineos is supposed to be a 'trusted environment', but take it with a good pinch of salt. "Come on Chris, go ahead"? No, I don't see Bernal and Thomas saying that. He can't compete with that duo, so he does well to leave after this season. In this way, he at least safeguards the few options that remain to him."

While this year's Tour de France is set to be characterised by the battle between Ineos and Jumbo-Visma, who also have three leaders, Boonen believes it's Froome himself who represents the greatest threat to the Ineos hegemony.

The Briton will find himself at a comparatively weaker team - although there's time for Israel to build a squad around him - but will have in-depth knowledge about how his soon-to-be rivals operate.

"I can't imagine that he won't bring anyone from Ineos. If you sign a champion such as Froome, you know that he will not come alone. He needs three to five strong pawns," said Boonen

"However, the last thing Israel have to do is copy Ineos. There are other ways to win the Tour. They are quiet citizens, Bernal and co. They gently squeeze everyone to death, until only they remain. It's a system that Froome knows through and through, but if one man can dismantle that and turn it into his own advantage, it's him. Provided he gets back to being his good old self, of course."

That last caveat is an area of concern for Boonen, even if Froome has recently insisted he's back to full fitness after his crash last June.

"You can do all the rehabilitation and training you want, such serious injuries always leave a trace," he said.