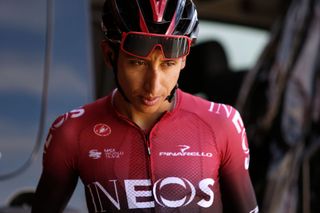 Egan Bernal has said that he has a good relationship with Team Ineos co-leader Chris Froome, adding that his various remarks to the media about the team's Tour de France leadership conundrum has not affected their friendship or caused any tensions within the squad.

In a wide-ranging interview with Colombian newspaper El Tiempo, Bernal spoke about the effect of the COVID-19 pandemic on racing as well as his team's Tour leadership and the possibility of riding the World Championships road race, which comes a week after Paris.

As one of three Tour de France winners at Ineos, it's possible that the 23-year-old's toughest competition will come from his own teammates, four-time race winner Froome and 2018 champion Geraint Thomas.

Bernal has said in the past that the road will decide, also saying in May that he wouldn't "throw away another opportunity to win another Tour de France" by sacrificing himself for his co-leaders.  Bernal said that his statements hadn't upset his teammates, having spoken to both Froome and Thomas at the time.

"He wasn't [upset]," Bernal said of Froome. "What happened was that we spoke at the time. Froome's statements came out and people took it as if he was angry at me, but he wasn't. He never got mad at me for what I said.

"We're friends and we all want to go forward, to win. Here, the most important thing is that the team wins – we're Ineos and the one that has to win is Ineos.

"Chris, Geraint and I are very honest with each other. When we see that one is better, then that will help. You can't say 'I'm the leader' – if I have to work for Froome I'll do it; if he has to give himself up for me, I'm sure he will, and so will Geraint."

Ineos management will decide who leads during the Tour, Bernal added, also stating that it's far too early to set anything in stone, given that racing hasn't restarted yet.

"The team is going to decide on one, but that's too soon to say. We haven't even competed to know. We even have to wait until the first stages of the Tour. Besides, it's a big question how everyone will be when they get there."

Bernal, like the rest of the peloton, hasn't raced since the early months of 2020, with the COVID-19 pandemic forcing a halt to the calendar from mid-March onwards.

The lack of racing, plus the different lockdown and training circumstances for riders, will bring some surprises when the action gets underway once again in late July and early August, said Bernal.

"There will be surprises, that's what I'm saying. Some of us have trained at altitude, others haven't.

"I think that, due to the circumstances, there will be many who will fight for the title and this Tour will have a much higher level than the previous ones. It will be a different event, not only in sport but in life, so it will have quite a lot of prestige and that is why we are preparing."

'It would be good to race the Worlds'

Bernal, the reigning Tour champion, will surely be back to his best come September. He has been logging seven hour days in training ahead of a return to competition, where he'll take on the Tour de l'Ain and Critérium du Dauphiné in the run-up to the Tour.

And while COVID-19 has massively disrupted his season thus far, Bernal has kept things in perspective.

"I can't complain. I feel lucky," he said. "I have the support of my team, of many people, of the group I work with. There are much more important sectors that have been affected, such as healthcare workers, and those who have lost their jobs are having a hard time.

"We, as sportsmen and women who cannot compete for a while, are affected, but there are other people who are more affected."

He's also confident that the 'new' season will go ahead as planned. Lockdowns around Europe are easing day-to-day and week-to-week, with closed doors sporting events already underway and restrictions on public life also softening. The threat of a second COVID-19 wave will linger, but Bernal says the races are guaranteed to go ahead.

"The races will be held. I am 100 percent sure they will be. There is a calendar and those races will be guaranteed to take place. The organisers of the three Grand Tours are looking at how they are going to be carried out. They are competitions that attract the public, so what they must know is how to hold them."

One race that could possibly be in Bernal's is the World Championships, set to be held in Aigle Martigny in Switzerland, near UCI headquarters.

The road race will be one suited to climbers, though given its position in the calendar – a week on from the Tour and six days before the start of the Giro d'Italia – it remains to be seen which Grand Tour riders will target the race.

"First I have to ride the Tour. That's the first objective" Bernal said. "Once it's over, I'll analyse the conditions I'll be in to go to the World Championships. It would be ideal to go and fight for the title, but in Paris we'll see what we're up to, what we have left for that other objective.

"It will be good to race – I have never been to a Road World Championships and it would be a good opportunity, an excellent option, but I have to think about how I will be in shape after the Tour. It's not worth going just to go; I want to compete, if we have the chance to win."