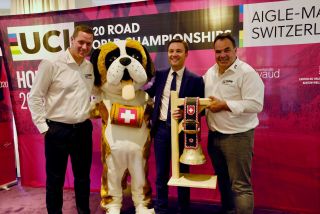 A decision on whether the 2020 World Championships in Aigle and Martigny can be held is likely to be taken in late June, according to organising committee co-president Grégory Devaud.

All public gatherings of more than 1,000 people are prohibited in Switzerland until at least the end of August due to the coronavirus pandemic but Devaud said the organisers were "reasonably confident" that the 2020 Worlds could go ahead as planned from September 20-27.

"We must have humility about the current situation out of respect for those who are fighting the virus every day," Devaud told the Sport Dimanche programme on RTS.

"A festival of cycling, yes, but not at any price. We’ll have to be consistent in the decisions we take, and we can’t be stubborn either."

When the UCI announced a series of financial cutbacks last month, it emphasised the importance of World Championships in all disciplines to its coffers. The governing body has yet to unveil a final version of its revised calendar of Autumn racing, but it has confirmed that the Martigny Worlds would remain in its original September dates, which would see the elite men’s individual time trial clash with the final day of the rescheduled Tour de France on September 20.

Devaud confirmed that if the World Championships do not go ahead in Martigny this year, the event would be unlikely to be postponed to a later date, given that Worlds hosts are already in place for the five following years.

"In the current configuration, it’s this Autumn or never," he said. "On the other hand, we could imagine a postponement to a later date, like 2026 or 2027, but that would probably be on a different model."

Devaud suggested that a decision on the hosting of the 2020 Worlds would be taken within the next two months. "We’re going to take a decision before the summer, by the end of June," he said.

The UCI is due to publish its revised Autumn calendar of racing on Tuesday. The announcement was postponed from last week after the French government announced that public gatherings of over 5,000 people would remain forbidden until September.