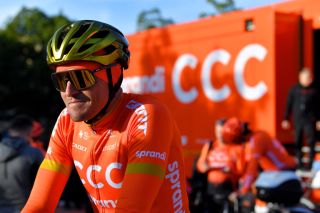 Riders at CCC Team have accepted a 50 per cent salary cut so the men's WorldTour team can continue to race during the 2020 season, but the long-term future of the team is in doubt after CCC decided to end its sponsorship at the end of this year.

In early April, the team managed by Jim Ochowicz announced they were suspending the majority of support staff and 'heavily reducing' rider salaries due to the financial impact of the COVID-19 pandemic on the team's title sponsor.

In recent weeks, riders and their agents have negotiated with Ochowicz, offering to accept major cuts to 2020 salaries in the hope the team can survive. However according to reports in Het Nieuwsblad and La Gazzetta dello Sport, and confirmed by a source to Cyclingnews, CCC will end its title sponsorship this year, a year before the agreed three-year term.

It is unclear if the decisions also affect the women's CCC-Liv team. According to Wielerflits.nl, the women's squad has its own agreement with the sponsors and they have met their obligations so far this year. CCC Team refused to comment but said it would communicating as soon as possible.

The men's roster includes big names such as Greg Van Avermaet, Matteo Trentin, Ilnur Zakarin and Fausto Masnada. A number of riders have contracts for 2021 and so will have to wait to see if the team survives before they can consider moves to other teams, while other riders will have to search for contracts in a difficult transfer market, with rider values plummeting as a number of teams are struggling financially.

Bike sponsor Giant has reportedly said it will continue to support the team in the future but Ochowicz and his Continuum Sports management company face a race against time to find a replacement for the Polish-based shoe retailer if the team is to retain its place in the 2021 WorldTour.

Riders expect the team to pay their March salaries in full, with the 50 per cent cuts impacting the rest of their 2020 contracts. Under UCI rules, salary cuts cannot leave riders earning less than the UCI minimum wage of €38,000.

Riders have still to be paid for April but the salary cuts should allow the team to survive for the rest of 2020 and race the new August to November calendar recently announced by the UCI. If CCC pays the reduced salaries, riders will not begin the procedure to trigger the bank guarantee covering three months of salaries registered with the UCI.

CCC Team have been hit hard by the COVID-19 coronavirus pandemic and the suspension of racing since March, with various reports in the Polish press detailing the financial struggles of the footwear company. Stores are closed and the CCC share price and revenues have plummeted, with billionaire owner Dariusz Milek cutting costs in response.

According to Bankier.pl, the CCC Group recently made an agreement with several banks to secure financing for the next 12 months. In order to restructure its second quarter expenses, it could be forced to cease all sports sponsorship.

The group expects to need cash to spend on closing stores in Germany and to settle with landlords of stores already closed in central Europe as well as the "closure of activities related to sport sponsorship, contracted for 2020-2021," the report noted.

"In order to have the budget to race should the season start again, we have had to temporarily suspend all but a handful of staff and heavily reduce rider salaries," manager Jim Ochowicz said earlier this month.

"As soon as racing can resume, we hope to be in a position to reinstate as many support staff as possible and reevaluate our budget."

The economic effects of the coronavirus pandemic have only begun to ripple through the sport of cycling. WorldTour racing is suspended until at least August, while the Astana, Lotto Soudal, Bahrain-McLaren and Mitchelton-Scott teams have all cut or deferred rider salaries.

UCI president David Lappartient has expressed concerns about the economic impact of the coronavirus pandemic on some professional cycling teams. In a report published in De Telegraaf on Monday, Lappartient said he hoped all the teams would survive until the end of this season.

"We know that three, four, five teams have more problems than other teams," said Lappartient. "We hope they all reach the end of the season."