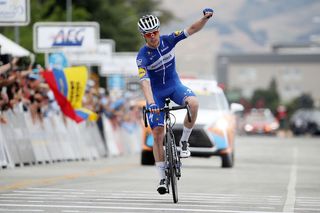 Frenchman Rémi Cavagna renewed his contract with the Deceuninck-QuickStep team, the Belgian squad announced on Friday. Cavagna, 24, won stage 19 of the Vuelta a Espana in Toledo last week and a stage in the Amgen Tour of California in May.

The 'TGV of Clermont-Ferrand' has been with the team of manager Patrick Lefevere since 2017 after moving through the ranks of the Klein Constantia developmental squad.

"First, I want to say thank you to the team for believing in me, because now it is three years that I have been with them and I am really happy," Cavagna said in a press release.

"It is the best team in the world and for my improvement it is best that I can be part of. Every year I am with them I improve and I pass the standard that I set last time. It shows in my results, where last year I won one race and this year I have already won two up until now, both of which are World Tour and bigger races. I am sure 200% that with this squad I can improve again and I have a lot to give."

Having put a Grand Tour stage win in his palmares, Cavagna is now hoping to don the French national champion's jersey some day.

"It is not the biggest race, but it's important to a French guy," he said. "I would like to do well in the road race, but the time trial is my speciality and I want to prove that I am able to win it. That is my first target, but for sure I also want to win more WorldTour races like I did this season at the Vuelta and California."

Lefevere has been working steadily to ensure the team continues its winning ways, renewing with Tour de France stand-out Julian Alaphilippe, Zdenek Stybar, James Knox and Pieter Serry through 2021, Iljo Keisse for one more year and Remco Evenepoel through 2023.

"I am again extremely happy that we have managed to keep hold of one of our talented young riders and that he'll stay with us until 2021," Lefevere said.

"Rémi has always worked hard during his time with us so far and is always at the service of the team. As we saw in California and at the Vuelta, he has also started to get the winning feeling for himself and his confidence is growing. We know what he is capable of and now that we have secured his services, we can work with him to improve even more and maximise his potential."