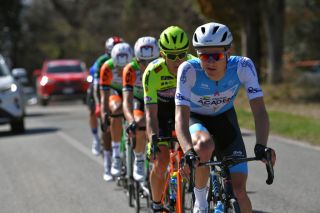 Alexander Cataford will stay with the Israel Cycling Academy next year as the team moves to the WorldTour.

The 26-year-old Canadian's season ended on a low note after he suffered broken ribs in a series of crashes at the CRO Race. Cataford finished the race before the broken ribs were diagnosed. Israel Cycling Academy rewarded his toughness and consistency throughout the season with a contract for next year.

“I had a great first season with ICA ," he said in a statement released by the team. "I learned at lot by being thrown into the deep end of European racing, and I'm happy with how I came out on the other side. It was a great year shared with a great team. I'm looking forward a some exciting times ahead.”

Israel Cycling Academy recently completed a deal to takeover the Katusha-Alpecin WorldTour team and so assume their top-tier license for the next three years. Although the final look of the 2020 roster has not yet been revealed, Nils Politt is expected to make the jump along with a handful of Katusha other riders still under contract.