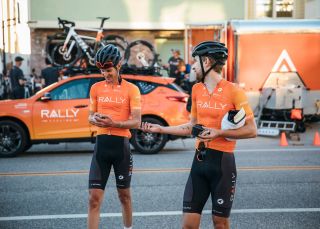 Rally Cycling announced on Monday that they are among the 23 men's and 16 women's teams invited to compete in the Virtual Tour de France in July.

The race, due to take place on weekends between July 4-19 on Zwift, has six stages for men and women using four new courses designed specifically for the race, including a simulation of Mont Ventoux to Chalet-Reynard and the Champs-Elysées circuit in Paris.

Rally Cycling have been present in many of the top-level virtual races since the coronavirus pandemic called a halt to all real-world racing, taking on the Digital Swiss 5, Women's Tour V-Series 2020, and Zwift Tour for All.

"We chose the men's roster based on past experience with virtual racing, and those who are best suited to make an impact in the upcoming virtual Tour," McCarty said. "We know that you don't need a large roster to get a result in e-racing, and so picking a few guys who we know can do well, and having them focus on just a couple of e-races is the best strategy for us.

"At the Zwift Tour for All, we saw some of our younger riders who are more familiar with the platform do well. There is a lot of strategy involved with knowing the courses (knowing when the resistance will kick in and to be near the front), knowing how to minimize the effort inside the draft and knowing how and when to use your power-ups.

"For example, in Stage 1 of the Zwift Tour for All, our young sprinter Pier-André Coté placed fifth despite having the lowest average watts per kilo of the riders in the front group. That really drives home his ability to interact with the platform while sustaining an effort."

On the women's side, director Zach Bell has been helping his riders master the finer points of racing on Zwift such as drafting, power-ups and what type of efforts to expect.

"We've learned that on Zwift, knowing and understanding the subtleties of the platform makes a big difference," Bell said. "It's a totally unforgiving form of racing where riders must operate at or above threshold almost constantly. The riders on our roster will have the ability to manage their efforts at an extremely high work rate and we believe that will lead to the best possible result for the team.

"Riders need to be tough and able to suffer pretty much from start to finish. Hiding and floating like you do in normal racing is not the same on Zwift. You have to be able to think about your next move while always keeping pressure on the pedals. Tough riders who thrive on the limit are the riders we see doing well week in and week out. These characteristics, in combination with good power to weight numbers over longer efforts, help a rider consistently make the final selection."