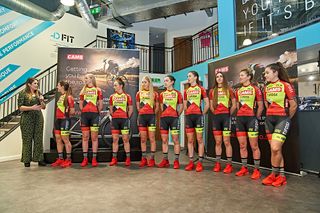 "Although some other sponsors in the sport have felt the need to reduce or cut back on sponsorship in view of the ongoing global Coronavirus crisis, CAMS is very much looking forward beyond the present situation to see the team compete successfully in future events," read a press statement Tuesday.

"In the meantime, CAMS is working to support the government message of 'Stay At Home, Protect The NHS, Save Lives'."

Lucinda Brand: It's crazy and unreal that we are in the history books

It has been reported that riders and staff of several of the men’s WorldTour teams have either volunteered salary reductions or have been forced to accept pay cuts including at CCC Team, Astana, Lotto Soudal, Bahrain McLaren, and Mitchelon-Scott's men's and women's teams.

Ronny Lauke, president of the newly launched teams union, expressed his concerns that some women's teams are in jeopardy and might not survive the pandemic crisis as businesses are struggling, sponsorship funding is cut and jobs are lost.

However, Canyon-SRAM rider Tiffany Cromwell offered a more positive outlook in that women's teams have lower costs and can adapt more easily in terms of generating interest for their sponsors organically.

The UCI has suspended all racing until June 1, which means, and of the Women's WorldTour races have been either cancelled or postponed through Britain's Women's Tour in mid-June.

CAMS-Tifosi team was recently confirmed as having attained UCI Women's Continental Team status for the 2020 racing season and was expected to be on the start line at races like Amstel Gold Race Ladies Edition. Like all the other teams, they are now waiting for racing to be restarted when the current lockdown is brought to an end.