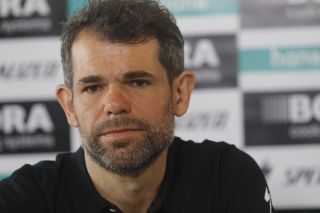 On the back of the announcement last week by the UCI and Tour de France organisers ASO that the Tour has been rescheduled for August 29-September due to the ongoing coronavirus pandemic, with other major races yet to be scheduled for after that time, opinions have been mixed as to whether those dates are realistic – and whether it's right for the Tour to take place at all.

Ralph Denk – the manager of the Bora-Hansgrohe WorldTour team, which is home to the likes of Peter Sagan, Emanuel Buchmann and Rafal Majka – is one of those that is very hopeful that the Tour will take place on the newly proposed dates.

"It's more than just a glimmer of hope. I firmly believe that we will roll down the start ramp in Nice on August 29," Denk told German newspaper the Frankfurter Allgemeine Zeitung on Tuesday.

"But in addition to the Tour, the other two Grand Tours – the Giro d'Italia and the Vuelta a España – and the Monuments [cycling's five biggest one-day races] are also set to be run before the end of the season, and that seems extremely unrealistic to me.

"If we do the Tour in September, the World Championships and the Giro could take place in October," he continued. "The Vuelta could then be the climax of the season in December. As a team, we'd be ready to race right up until Christmas.

"If we did manage to squeeze in the five Monuments, we would have saved almost everything in cycling," Denk said, referring to the sport's major events, at least. "At the end of the year, we'd be able to say that we were in a good position."

Asked whether such a busy schedule of events would be feasible for teams and their personnel in terms of logistics, Denk replied that it would be.

"Everyone will be rested by the time we start racing again; we'd roll up our sleeves and get on with it because those races are key events in our industry," he  said.

Even if only the Tour de France could be run, Denk suggested, it would still provide much-needed publicity to the teams' and the sport's sponsors.

"We could still live with that," he told the newspaper's website, Faz.net. "But if no races took place, that would be a major setback for cycling."

While a number of teams – including Bahrain McLaren, Lotto Soudal, CCC Team, Mitchelton-Scott and Astana – have reduced the salaries of riders or staff during the continuing crisis, Bora-Hansgrohe have so far been able to balance the books.

"We have great partners who have stood by their commitment and investment," Denk said. "We decided to pay the riders and team-staff salaries in full during April, and we'll decide what to do month-by-month in May, June and July. A lot will depend on when we start the season again; so far we only know about the Tour being set to start on August 29."

Denk added: "I believe that, in spite of the crisis, the sponsors will largely fulfil their financial agreements in the entire sports world. But the economic recession will make it significantly more difficult to generate sports sponsorship funds.

"No matter whether it's in cycling, soccer or handball. The vast majority [of sponsors or potential sponsors] will have less budget available next season."