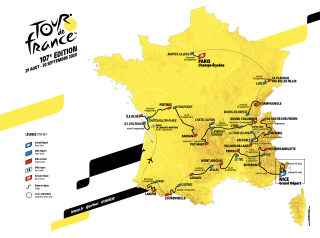 One of the leading experts in global public health, also an adviser to the Scottish government on the COVID-19 pandemic, has described the plan to stage the 2020 Tour de France, even as late as the end of August, as a "recipe for disaster."

Devi Sridhar, Chair of Global Public Health at the University of Edinburgh and one of the most prominent experts on testing strategies to fight the Coronavirus pandemic, warned that the Tour going ahead, even in August, could kick-start another spread of the virus in Europe.

"It's a painful decision but they have no choice," Sridhar told Cyclingnews. "The wise thing to do is cancel for this year.

"[The Tour promoters] have to weigh the risks against the benefits. Thousands of people from all over the world, gathered together, moving around, from town to town, this is where a virus could thrive - it could be a recipe for disaster," Sridhar said.

"There's definitely a risk that the Tour de France moving around and unwittingly spreading the virus could kick start a new lockdown."

The change to the Tour's schedule became a fait accompli after French President Emmanuel Macron banned any large public events until July 11. The Tour had originally been scheduled for a June 27 start. In response to Macron's decree, the Tour has now been postponed from its original date to a Grand Depart in Nice on August 29, but even this two month delay drew criticism from Sridhar.

"This is a long-term problem, a chronic problem," she said. "This virus is here to stay and will come back. Even if France gets a handle on it by August, then of course the issue is people coming in from different countries.

"This (the arrival of the Tour's international convoy) could set off a new cluster of infections so you'd have to think, at minimum, of a two to three week quarantine before they properly come into the country."

In that case, as Sridhar suggested, this would mean that all those working within the Tour 'bubble' would need to be quarantined at least two weeks prior to the Grand Depart on August 29.

"People would have to arrive two to three weeks before to allow time for quarantine," she said, while accepting that such restrictions on elite athletes were unlikely to be imposed.

"I don't think going ahead is realistic. It won't be like the Tour in previous years. It would make more sense to cancel," she said. "That seems more realistic."

Ideally, she said, testing for the virus in the Tour convoy would be onerous.

"Ideally they would test everybody every day, but the logistics would be both mind-boggling and expensive. We know 20 per cent to 60 per cent of people are pre-symptomatic, in that they feel fine and exhibit no symptoms but are passing the virus to others," she said.

"This virus is wily. We don't have a treatment or a vaccine and in fact a vaccine is super far off, like a year or a year and a half, in best case".

But even if those concerns are unfounded she reiterated that there were a host of other issues regarding the Tour being run as usual.

"One thing we don't know is if indoor transmission is different to outdoor transmission (of the virus) so you could implement use of masks. If it's not behind closed doors you could require everyone, including spectators, to wear masks.

"That could start other problems," she said. "If fans are used to gathering and then are told they can't because they don't comply, that could be problematic. You might need a police or military presence to enforce this, so running the Tour not behind closed doors is setting up a situation that might spiral out of control."