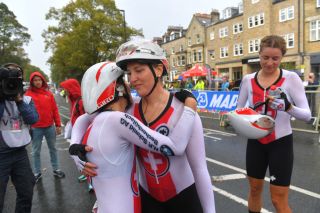 Bigla-Katusha have completed their roster for next season with the signing of former mountain bike world champion Kathrin Stirnemann, the team has announced.

Clara Koppenburg returns to Bigla in leadership role in 2020

Marlen Reusser signs with Bigla-Katusha for 2020

The 30-year-old Swiss rider will combine mountain biking with her debut season on the road, and hopes the two disciplines will complement each other.

"I'm looking forward to this new challenge," Stirnemann said in a Bigla press release. "I think that my strong technical skills on the bike will also be helpful on the road. The quick starts in mountain biking have already given me a feel for the hectic nature that I can expect in the peloton, and I'm also hoping to be able to transfer my sprinting skills well on the road.

"However, good planning next year will also be the key to success. I think that the two disciplines can complement each other very well. Because I already train on the road a lot for MTB, I don't think too much will change there," she said.

Stirnemann became cross-country eliminator world champion in 2014, and took the title again in 2017. She's also been the European champion in the same MTB discipline three times, in 2014, 2015 and 2017, and is targeting the MTB European Championships and World Championships next season.

"The road races in the spring will hopefully also strengthen my stamina and speed ahead of the important mountain bike races. And while the MTB European Championships and World Championships take place fairly early next year due to the Olympics, I'll be able to concentrate even more on the road racing scene in the second part of the year," she said.

She's already dipped her toe in the water this season by being part of the Swiss team that took sixth place in the team time trial mixed relay at the UCI Road World Championships that took place in Yorkshire, in the UK.

"I'm glad that Kathrin has extended her ambitions to the road-racing discipline," said Bigla team manager Thomas Campana. "We truly believe that she has a lot of talent and can develop this to achieve good results on the road, just as she has done in MTB.

"We were looking for a rider with strong technical skills and international racing experience, and also wanted to develop more Swiss riders as part of our project. Therefore, we are very happy that Kathrin has decided to join our team. We're looking forward to providing her with the best platform to develop within the international road-racing scene," he said.

Other new signings to Bigla for 2020 include Germany's Clara Koppenberg – who returns to the team following a season with WNT-Rotor – and Swiss time trial and road race champion Marlen Reusser.

The team will be called Bigla-Katusha next season following the announcement that clothing company Katusha Sports, who supplied kit to men's WorldTour team Katusha-Alpecin this season, will become Bigla's clothing supplier.