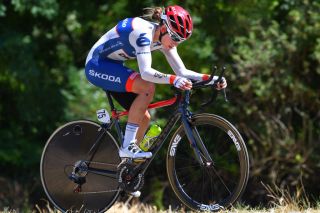 Clara Koppenburg will return to Bigla in 2020 having spent a season with WNT-Rotor (Image credit: Getty Images)

Clara Koppenburg will leave WNT-Rotor and return to Bigla Pro Cycling where she will assume a leadership role during the 2020 season. The German climber will focus on making selection for the Olympic Games in Tokyo and the World Championships in Switzerland.

"My strengths lie in descending and of course climbing, particularly during stage races, and I'd also like to work more on my time trialling, which is a discipline I quite enjoy," Koppenburg said in a team statement.

"My other goals also include the Olympic Games and the World Championships, as well as defending my title in Valencia. I'm also looking forward to re-joining my teammates and everyone from Bigla, and I can’t wait to get started," she said.

Koppenburg, 24, started her professional career in 2015 with Bigla, where she spent the next four seasons. In 2019, she transferred to the WNT-Rotor team where she found success winning the overall title at Setmana Ciclista Valenciana.

WNT-Rotor off to a winning start at Setmana Ciclista Valenciana

She took some time off due to injury but returned to racing in May at the Tour of California, where she was fourth overall. She went on to take 13th overall at Emakumeen Bira, seventh at the Tour de Bretagne, fifth at the Giro Toscana and second at the Tour de l'Ardeche.

"My years with Bigla were fantastic, and I learned a lot while I was with theteam and really felt like I made so much progress in developing myself as a rider. I noticed that this aspect was missing somewhat when I moved away from the team, so I am very happy to return to Bigla from next year," she said.

"The atmosphere is excellent, I get along great with the riders, and the entire setup is very professional. I think that team manager Thomas Campana really brings the best out of his riders and I feel like I can make substantial progress in such an environment."

The team has had ample success over the years with leaders Ashleigh Moolman-Pasio, who moved to CCC-Liv last year, and Cecilie Uttrup Ludwig, who will race with FDJ Nouvelle-Aquintaine Futuroscope in 2020.

In the team press release, Campana said that Koppenburg will assume a co-leadership role at the Ardennes Classics and stage races.