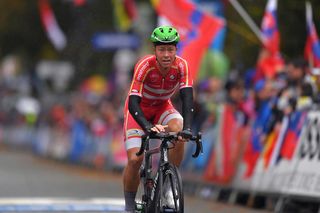 Denmark's Michael Valgren crosses the finish line of the elite men's road race, and would soon be able to celebrate his teammate Mads Pedersen's win at the 2019 World Championships (Image credit: Getty Images)

Mads Pedersen took Denmark's first victory in an elite men's World Championship road race in Yorkshire on Sunday, and the national team – and the nation – made sure they celebrated it.

The victory saw Denmark's newspapers adorning the front covers of their Monday-morning editions with the news, with Pedersen's red-and-white national kit brightening the otherwise dark, murky photos from a wet and windy Worlds road race.

Politiken said Pedersen had "made Danish sports history, on a par with the national football team in 1992 [when the men's team won the European Championships] and tennis star Caroline Wozniacki in 2018 [when she won the Australian Open]".

Back in Harrogate, Pedersen's national teammate Michael Valgren – who took sixth place, and had started the day, along with Jakob Fuglsang, as one of the team's leaders – told reporters that he wasn't quite as surprised as many other observers were.

"He's a massive talent, you know? He always has been," Valgren said of the 23-year-old. "One of Mads' strengths is that he has big ambitions. He's not afraid to take it from the gun, and he did today, more or less. As soon as we came onto the finishing circuits, he started to attack. That's typical Mads; when he's strong, no one can keep him down."

Pedersen made it into what was the decisive five-rider move, in which he had pre-race favourite Mathieu van der Poel (Netherlands), Switzerland's Stefan Kung and Italian duo Matteo Trentin and Gianni Moscon for company.

"I saw he was alone with two Italians, so I thought they'd play that card against him, but I don't know if Moscon was dropped or something," Valgren said, with first Van der Poel dropping out of contention with just over 10km to go, and then Moscon indeed being unable to follow the pace with around five kilometres to go.

Pedersen then overhauled the faster-on-paper Trentin, with Kung left to take the bronze medal.

"I saw on the screen that he'd won, and I was, like, 'Fuck – that was incredible,'" said Valgren. "Mads is fucking fast actually.

"It was so cold – one of the worst days on my bike," he continued of the conditions the riders had to endure. "I had a really shit day in the beginning, to be honest. After 120km, before we got to the circuits, I stopped to take a dump, actually, but then punctured when I was on my way back.

"I was, like, 'Shit – can I get paced to come back with the new UCI rules, whatever they are?'" he said, referring to the illegal-but-common practice of using the convoy of team cars to get back into the peloton – a practice that saw the initial winner of the under-23 men's road race on Friday, Nils Eekhoff, disqualified for sheltering behind his team car for too long after a crash.

"But, yeah, I got back in the middle of the first lap, so after that I was just trying to stay near the front and keep warm."

Asked whether he thought that the terrible conditions had played into the Scandinavian nation's hands and helped him and Pedersen to their high placings, Valgren said: "I haven't lived in Denmark for three years, and I don't like the bad weather, but I think we're always good in it, so maybe it has something to do with when we were kids growing up there."