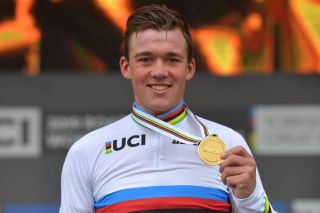 Mads Pedersen will go down in history as the first Danish rider to capture the elite men's road race world title. He secured the prestigious rainbow jersey in a three-up sprint at the UCI Road World Championships in Yorkshire on Sunday.

Pedersen, 23, collapsed from exhaustion after crossing the finish line, surrounded by his teammates who had piled on top of him in celebration of his victory.

"It's crazy," Pedersen told the press in Harrogate. "I had no energy left. I cramped when I wanted to unclip from my pedals. There were so many people around me, and I couldn't stand up. At one point, I had four guys laying on me on the ground, and it was worth it.

"There have been some good guys in the past, and they are still racing. We had [Matti Breschel] who had a silver and bronze medals. I think it's unbelievable for the national federation to finally get this jersey and a World Championships gold medal to bring home."

Denmark may have only just won its first world title in the men's event, but in the 92-year history of the elite men's World Championships, it has secured five medals. Leif Mortensen took the silver medal in 1970, Jørgen Marcussen bronze in 1978, Bo Hamburger silver in 1997, Matti Breschel took a bronze in 2008 and silver in 2010.

The country scored its first elite road world title in 2016 when Amalie Dideriksen won the women's title in Doha, Qatar, and have won nine junior and three U23 titles throughout the years, including Mikkel Bjerg's triple time trial victories.

Pedersen attributed the success of young Danish riders in the WorldTour peloton to the support from the national federation.

"The junior teams and federations start earlier," Pedersen said. "I was already on the national team when I was 17, and we already started to become more professional. That's happening more and more now.

"I think the junior teams and the national federations are getting way more professional, and that's paying off at a younger age and when people are turning professional."

No longer the underdog

Pedersen turned pro in 2014 with Cult Energy and then joined the WorldTour ranks in 2017 with Trek-Segafredo. He has a contract that extends to the end of 2020, and a focus on the Classics. He has steadily progressed during the last three seasons with victories at Tour of Denmark, Tour du Poitou Charentes and Tour de l'Eurometropole. His most significant career success, outside of the world title, came last year at the Tour of Flanders where he finished second behind Niki Terpstra.

Pedersen was considered one of the many underdogs at the World Championships in Yorkshire. His name was not mentioned among the list of favourites like Philippe Gilbert and Greg Van Avermaet, Peter Sagan, Julian Alaphilippe or Mathieu van der Poel. Perhaps that served in his favour.

As the elite men's shortened 261km race progressed under brutally cold and wet conditions, he emerged as one part of what turned out to be the winning breakaway.

Stefan Küng (Switzerland) initiated the move on the fifth to last lap, and Pedersen bridged across before being joined by Gianni Moscon (Italy), and then Matteo Trentin and Mathieu van der Poel (Netherlands).

Van der Poel lost contact with the breakaway on the last lap, followed by Moscon, and the trio that remained out front sprinted for the world title.

Küng attacked on the early slopes of the uphill drag to the finish line, but he was caught and passed by Pedersen. Trentin, who looked to be the strongest sprinter of the three, finished with the silver medal after leading out the sprint only to be overhauled by Pedersen.

"I was sure that Mathieu [van der Poel] and [Matteo] Trentin would be faster than me in the final," Pedersen said. "Van der Poel exploded really hard and after that, I was sure to have a medal. Moscon had done a lot of work and he had already been dropped once on the climb with a little more than one lap to go. I was sure he would be dropped again on the last climb.

"After that, I would have just been happy with a medal. But when you are three guys, you have everything to win and nothing to lose. I took a chance and waited for the sprint and luckily it was enough to get the jersey."

Pedersen said that wearing the rainbow jersey for the upcoming season has its pros and cons. For one thing, he will no longer be able to fly under the radar at the WorldTour level. He said he's up for the new challenge.

"Winning the world title would change a lot for every guy who has been a world champion, and so it will change a lot for me also," Pedersen said. "I'm finished with playing the underdog. That will be impossible from now on. That's a new situation for me to be in. I'll have to race in a new way from now on."

Pedersen expressed his gratitude to the people who have supported his relatively short but successful career including his parents and fiancée, who were in Harrogate watching the race from the finish line.

He also thanked his coach and the national team federation for supporting his career beginning from a junior-level athlete.

Lastly, he thanked the race organisation for designing a brutally hard course and the fans who lined the streets to cheer for the races all week.

"Thanks to everyone for being out on the roads in conditions like this. It was nice to see so many people out there," Pedersen said. "The crowds were crazy. I never did a race with that many people around, especially in bad weather. The course was crazy hard, too, but in the end, it was good for me."