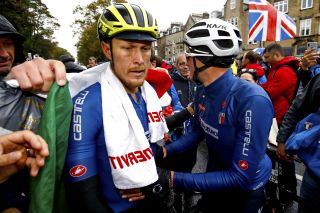 Matteo Trentin's four-letter testimony when he crossed the line in Harrogate probably didn't make it past the copy editor of Italy's post-race press release, but it certainly summed up both and Trentin and his nation's feelings after the rider narrowly missed out on claiming Italy's first rainbow jersey in over a decade at the UCI Road World Championships in Yorkshire.

Until the final 200 meters of the gruelling 260km elite men's road race, Trentin and his squadra had ridden a near faultless race. Gianni Moscon had been rolled out to cover a dangerous break when it formed on the Harrogate circuit, while Trentin was the sharpest rider in the pack when Mathieu van der Poel launched a devastating attack with 33km to go.

With the Belgians and Dutch left trailing, Italy appeared to be on the cusp of winning their first elite men's title since Alessandro Ballan in 2008. In fact, Italy's position became even more dominant when Van der Poel cracked with 12.7km to go leaving Trentin and Moscon with just Stefan Küng and Mads Pedersen to concern themselves with.

Moscon buried himself to keep the break clear and even when he slipped off the back most onlookers predicted a win for Trentin. However, after such a long race, and such atrocious conditions sprinting becomes a matter of will and resolve as much as strength and power.

With Pedersen on the front with 200m to go Trentin launched his sprint. The Italian rose from the saddle and for the briefest flicker of time it looked as though the Mitchelton rider would be donning the rainbow jersey, but when the Italian sat down seconds later and Pedersen inched ahead, gasps of shock ran through the press tent aside the finishing straight.

Pedersen is no slouch, as his progression and second place in last year's Tour of Flanders have shown, and he edges Trentin 1-0 in Monument podium finishes, but he still started the Harrogate sprint as the undoubted underdog.

"The World Championship is never in the pocket as you can see," Trentin said as he tried to hide his disappointment.

"Today was incredibly hard, so it can be one little thing. I got frozen at the end. I took off my jacket for the last lap and was frozen in 15 minutes. It's a matter of one million things today. I think we proved that we were the only two that could get across to the breakaway. We probably spent a little bit too much, but that is cycling and there is nothing you can do," he said when asked about where his race was lost.

"When Gianni dropped off the back, everyone knew we could medal. Everyone took a turn and no one played a game. I was trying to recover as much as I could for the final sprint but there is no story here. Mads won. That's all."

Pedersen was certainly a deserving winner but Italy and Trentin will still play Sunday's finale over and over in their minds. Having two riders in a group of four should have been enough.

"I would be happier to have the [rainbow] jersey that this guy has," Trentin said as he looked towards the Dane on his left.

"When you are there and you know that you can have the jersey, you aim for the jersey. At the end of the day, one guy was better than me, there is nothing to regret about my performance. One guy got the jersey and the other two got a medal, and all the rest have nothing. I was on the nothing side two years ago. That was even worse."

In time Trentin will take heart and confidence from this performance. With Moscon today, Alberto Bettiol in Flanders and Elia Viviani in the European championships, Italy has emerged once more as a dependable force on the world one-day stage.

That said, Trentin, now 30, is unlikely to ever have a better chance of winning the rainbow jersey. It's hard to imagine so many other proven WorldTour winners being so off the pace as they were in Yorkshire, and Trentin would have given anything at the start of the race to have ensured that he entered the final kilometres with a relatively inexperienced rider and a diesel such as Küng. Italy's long wait for a rainbow jersey continues.