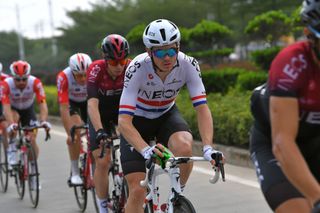 After a dismal start to 2019, which saw him spend time in hospital with a torn spleen, Ben Swift says that he's enjoyed one of his most consistent years yet following his return from a late February crash.

The Briton, who rejoined Team Ineos this season after two years at UAE Team Emirates, spent a week in hospital after the training crash early in the year, and didn't ride again for over two months.

However, since his return, he has become British national road race champion, and raced at his home Worlds in Yorkshire. On the final stage of the Tour of Guangxi, Swift said that he's enjoyed his season despite the painful start.

No fairytale finale for Swift at home World Championships

Ben Swift: It's hard to think about comebacks when you're lying in intensive care

"I think it's been pretty good," Swift told Cyclingnews. "I've enjoyed the year. I'm looking forward to building on this year into next year, and I've really enjoyed my time and had one of my most consistent years."

Swift had called his time at UAE "pretty much the worst 18 months" of his career, and he viewed rejoining what was then Team Sky as a chance to set things back on track. It was also a chance to switch roles to a team player who would have his own chances, rather than ride as an outright leader.

But after racing the Volta a Valenciana, where he took a podium finish on stage 2, and the Tour de la Provence, Swift's return looked in danger of falling apart after crashing on a descent while training in Tenerife. But despite the spleen injury and a spell in intensive care, his team made the comeback a lot easier, he said.

"It was a tough recovery, but I had a great support staff around me. I didn't even have to think about anything, apart from just getting myself healthy, and stuff like that.

"It was a pretty scary time, but I knew I was in great hands, and I had still had the passion and desire to come back."

A steady mid-season, including top tens on stages of the Tours of Norway and Suisse, burst into life in June, with a dream realised at the British National Championships, and a victory made all the sweeter by his early season travails.

"I think that winning this off the back of that crash, and after going so close in the past was quite a special moment," he said. "It has been nice to represent the jersey for the rest of this year and going into next year too."

More steady results followed, including a podium on stage 4 of the Tour de Pologne, and top tens at the Deutschland Tour and Tour of Britain, but Swift's big goal for the end of the season was the World Championships in Harrogate.

A home Worlds doesn't come along very often, never mind in a rider's home region, but the race – Swift's seventh participation – ended in disappointment for him. After a long, hard race hit by miserable weather, he ended up 31st, almost four minutes down on surprise winner Mads Pedersen.

"I mean the Worlds didn't go how we wanted it, but that's road racing, you know? You can prepare for one day and then it's just that stuff doesn't go quite right on the day. But that's one of the good things about cycling – you've always got another opportunity around the corner.

"I can be happy with how the season has gone. It's been consistently good. I've gone into a new sort of role in the team and look forward to developing that next year.

For next season, goals will broadly be the same as in previous years for Swift, though nothing has been 100 per cent confirmed just yet. One thing for certain is that it'll be another chance to start afresh.

"I've got a couple of ideas," he said. "I'm meeting with the team next week and then we'll just take it from there. We'll see what they want, what I want, what the other guys want.

"I think that [I'll have] just the same goals as this year, really. A big focus early season will be on San Remo. It's quite a good target for me. But yeah, we'll just see what they want and what I want, and then take it from there."