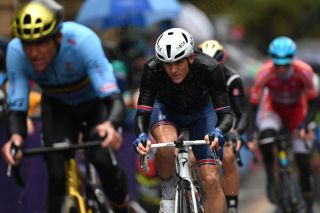 The Great Britain team came into the UCI Road World Championships in Yorkshire with aspirations of animating the race in the final laps around Harrogate but in the end, the squad was unable to make an impression on a brutal day of racing that saw only 46 finishers.

Ben Swift, the team leader for the elite men's road race, came home in 31st place, while Tao Geoghegan Hart faired slightly better in 26th. The rest of the team, including 2018 Tour de France winner Geraint Thomas, quit the race after heavy rain and cold temperatures buffeted the race throughout the day.

"Yeah definitely, it was severe," a shivering Swift told reporters as he tried to warm up at the finish.

"It was a really tough day out there. Epic weather. It'll probably look cool on the photos and stuff later, but it actually got really cold towards the end. You know when it's cold like that you know you need to start stripping off and get ready for the finish. But we gave it a good shot."

The British team, along with several other nations, had no answer when the winning break formed with 33km to go. Mads Pedersen (Denmark) eventually won a three-man sprint ahead of Matteo Trentin (Italy) and Stefan Küng (Switzerland), with the rest of the finishers trailing home in ones and twos. The British failed to put a rider in any of the breakaways but still had hopes of supporting Swift if the race came back together. At the line, however, Swift simply had nothing in the tank.

"It was definitely hard, it was cold and pretty I'm freezing now. It was quite windy at times, and there were a lot of grippy hills out there which made it quite difficult. This climb here - the finishing circuit, sorry - is really difficult.

"I think it's the hardest [Worlds] that I've done - each one's been a little bit different. Qatar was pan flat, the crosswinds, and pretty warm weather. The thing about this course was the short punchy climbs and this weather made it very difficult."

Despite the atrocious conditions, Swift and his final support rider Geoghegan Hart had no intentions of throwing in the towel.

"You don't want to give up. You go until you can't go any more."