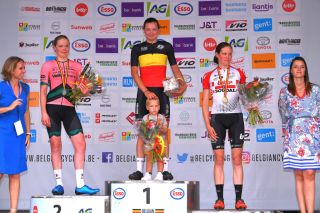 Lotto Soudal Ladies announced the signing of Jesse Vandenbulcke to their roster for 2020. Vandenbulcke, 23, spent four years with the programme as a novice, junior and first-year elite but left the sport due to back pain in 2016.

An impressive comeback this summer saw her secure the Belgian road race title while racing for Doltcini-Van Eyck Sport and she hopes to continue that success into 2020 with Lotto Soudal Ladies.

"There was a great atmosphere in the team back then, it even felt like a family," Vandenbulcke said on the team's website.

"Riders and staff had a great bond. When we see each other we often talk about that time. I always maintained a good contact with the team and I am very happy to return to Lotto Soudal. I'm convinced that I will feel good at Lotto Soudal and will be surrounded with the best care."

Vandenbulcke joined the pro ranks with Lotto Soudal Ladies in 2015 after spending much of her youth developing on the team's novice and junior-level categories. She moved to Lares-Waowdeals in 2016 but a back injury forced her out of the sport. In 2017, she gave birth to her son and then made the decision to slowly return to the sport while working a full-time job.

"I quit cycling in 2016, in my second season as an elite rider. My back hurt too much. I couldn't train without pain and also in my everyday life I had problems. But as time passed, it felt like I wasn't ready with cycling quite yet. I hadn't achieved my goals yet. People also often asked me if I would still race again. And so I decided to make a comeback. I am still very happy with that decision," Vandenbulcke said.

Vandenbulcke worked her way back up the ranks beginning with club-level racing before signing a contract to race with Doltcini-Van Eyck Sport this season. Her season highlights included victory at the Belgian National Championships, 11th at Gent-Wevelgem, sixth on stage 3b of the Tour de Feminin and 10th on the final stage of the Lotto Belgium Tour.

"When I made my comeback I had a plan. First, I wanted to ride for a club team and see if it was really feasible to get my place in the bunch back," she said. "In the beginning I worked full-time, but still I managed to have a good start. Then I got the offer to join a UCI team. It's now or never I thought and I decided to start working half-time. From then on I could train more specifically and take more rest. And then I became Belgian champion. You need some luck, but you must also work a lot.

"I had never thought my comeback would go so smoothly though and that I would become Belgian champion this year. Up till now I didn't have any back problems, but I am alert. I have a good team around me that monitors me closely. They see to it that I sufficiently train my back muscles and that I have the right bike position and saddle."

Vandenbulcke is aiming for progress during the 2020 season with Lotto Soudal Ladies but is also looking forward to being a support rider for Lotte Kopecky in the sprint finishes. She is aiming for strong performances at the spring Classics - Omloop Het Nieuwsblad, Gent-Wevelgem and Tour of Flanders - while also supporting her teammates at the hillier Ardennes Classics.

She is also aiming to defend her national title and, in future, to compete in the World Championships.

"By conquering the Belgian title I realized one of my goals much sooner than ever expected," she said. "Now I would love to wear that jersey a second time in my career. That is a new goal for the future. And when the course suits me I once would love to get a good result at the World Championships. But that will only be possible in several years time."