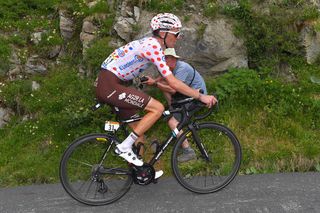 AG2R La Mondiale leader Romain Bardet is already looking forward to returning to the Tour de France next year following the unveiling of the race's 2020 route in Paris on Tuesday.

"Once again, the Tour de France organisers have created a very beautiful route," Bardet said on his team's website. "The number of stages in the mountains will offer us the chance to put on a good show, and I'm sure there are a number of other riders who'd also like to be part of that.

"This presentation has given me the chance to see what we'll be facing more clearly, and offers new elements to finish drawing the outlines of my 2020 season," he added.

Bardet is expected to ride a considerably different race programme in 2020 compared to 2019, hoping that it may kickstart his results following a largely disappointing season. He flirted with the idea of starting the Giro d'Italia this year, but ultimately decided not to.

However, after never really managing to begin his challenge for the GC at the 2019 Tour – settling, in the end, for 15th overall and the 'king of the mountains' jersey after losing ground as early as stage 6 on the climb of La Planche des Belles Filles – Bardet may include the 2020 Giro on his race programme next season, which he'll begin in Adelaide, Australia, at the Tour Down Under in January.

"It's a Tour de France course that's quite different, with many new features," he also told L'Equipe. "There are a number of new climbs, which may make the race unpredictable, and seeing it of course makes me want to return to the race."

Team manager Vincent Lavenu added: "This is undeniably a Tour for the climbers, and therefore a Tour that matches the strengths of the AG2R La Mondiale team.

"The course passes not far from our headquarters [in Chambéry], and that in particular motivates us. In 2020, we'll again work hard to arrive at the start with the team that can best influence the race," he said.