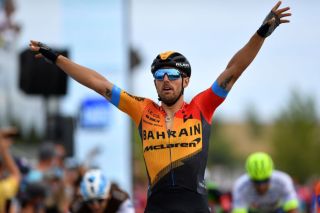 Bahrain McLaren have riders targeting both the Italian and Spanish road race national championships on Sunday, as well as Friday's time trial in Spain. Sonny Colbrelli is one of the favourites for the road race in Italy, while the team believes that Pello Bilbao has a very real opportunity against the clock in Spain.

"We aim to take a medal," sports director Xavier Florencio said of Bilbao's chances in the time trial in a press release on Thursday. "Maybe it's going to be difficult to take the win, but Pello is in great shape, and he was on the podium last year, taking the silver medal. The course is demanding, featuring a small climb at the end, but it suits him, and he's motivated, too."

In the Spanish road race, Bahrain McLaren also have only one rider competing, and Florencio admitted that it will be tough for Ivan Cortina without any teammates to help him.

"It won't be easy for him, as he won't have the support of the teammates, like other rivals will have. But Ivan feels good, he's highly motivated, and sometimes there are surprises at the Nationals," said Florencio. "Regarding the course, it's a tough one, featuring a 25km circuit, including 500 metres of climbing every lap."

The team is very well represented for Sunday's road race in Italy – a 254km course from Bassano del Grappa to Cittadilla, which includes 11 laps of a 12.5km circuit, featuring the climb of the Rosina, which will be tackled by Sonny Colbrelli, Enrico Battaglin, Eros Capecchi and Damiano Caruso.

"The course could suit sprinters that manage to still have enough energy after taking on the climb multiple times on the finishing circuit," explained directeur sportif Franco Pellizotti. "It's a short climb, and not so hard, but it can be selective when climbing it so many times.

"For that reason, one of the favourites of the race is Colbrelli, who is not a pure sprinter and who has already shown to be skilled on a course that is a bit similar to the Belgian Classics, and which also includes a short pavé stretch.

"Sonny feels good, and his restart to the season has been excellent so far: not only did he take a win [a stage at the Route d'Occitanie], but he also rode a very hard edition of the Critérium du Dauphiné. He's more than ready for Sunday's race, and we make no secret of our ambition to chase the gold medal," Pellizotti said.