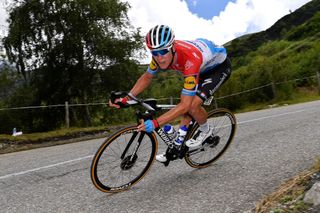 Bob Jungels (Deceuninck-QuickStep) added his sixth Luxembourg national time trial title on Thursday. The test was one of the few remaining national championship events on the calendar after many countries opted to cancel because of the coronavirus pandemic.

"Every title at the Nationals is special, but this one feels more special, because we didn't know if we would race again this year, so every race we do and every victory we get is important," Jungels said. "To win another ITT title is nice, and it makes me proud that I could deliver it for the team, and I will now end the season with this jersey on my shoulders. I rode a very good time trial, I am happy with my condition and now I'm looking forward to Sunday's road race."

Christine Majerus (Boels Dolmans) won the women's title for the 14th straight year, continuing her undefeated streak in the Luxembourg championships, which also includes titles in the road race and in cyclo-cross. The race was only 10.5km long. Majerus beat under-23 rider Claire Faber by 49 seconds, with junior rider Marie Schreiber in third.

That was a 🔥🥵 ride to 🇱🇺 TT national champ of 2🦠2🦠📸 Serge Waldbillig pic.twitter.com/erbKNimBKdAugust 20, 2020

Gradek relegated the defending champion, Maciej Bodnar (Bora-Hansgrohe), to second place with a strong ride in the 44-kilometre event. Lukasz Wisniowski, also with the CCC Team, rounded out the podium.

"Winning this race and taking the jersey was a big personal goal of mine for this year, and I am so happy to have been able to reach it," Gradek said. "I knew it would be a nice opportunity for me to try to go for the title, and I felt good, so I am really pleased with the result and also to finish ahead of Bodnar, who is always a favourite, for the first time. It was a new course and it was definitely a fast one, which allowed me to show my power, and my average speed was 52kph.

"I felt good coming into the race, and I felt like I could win today. It's always easy to say that, but over the last month, I have really been preparing for this race. I had some good training kilometres and some good racing from Burgos and Tour de Pologne in my legs, so I was positive and I am thankful that I was able to finish it off. I want to thank the team for helping me to prepare for this race and to get the win for the team is a nice feeling, too."

"I am really happy to be the Czech time trial champion again. After the Tour de Wallonie, it was a long trip to get here, and I only arrived not too long before the start," Cerny said. "It was a different course so I just did a quick recon lap and then warmed up on the rollers, and then it was time to race. Without the team and having someone in your radio, it can be difficult to know how you are really going, and at first I felt quite stiff after racing really hard in Wallonie. But then on the second lap, I started to get into more of a rhythm and increased my speed.

"We didn't have any time checks and it was only a difference of 10 seconds in the end between first and second, but it was a really fast race and my average pace was 51kph. It will be nice to wear the skinsuit again, so I'm looking forward to doing my next time trial in the Czech colours. Now, I'll have the road race on Saturday. I think it's going to be a tough race, so we'll see what I can do there."

Estonia held its elite men's road race championships on Thursday, with Israel Start-Up Nation's Norman Vahtra taking the win from a five-man breakaway that went in the first kilometres. He beat out Karl Patrick Lauk and Gert Kivstik to take the win.

The various national championships continue on Friday, with individual time trials in France, Italy and Spain for elite men and women.

The Estonian Championship was mostly decided ... 5 km into the 158 km affair. "It was the instinctive decision to go into a breakaway right away" said the new champion @NVahtra who beat his breakaway partners in a sprint. pic.twitter.com/78LJ9D1Ji0August 20, 2020