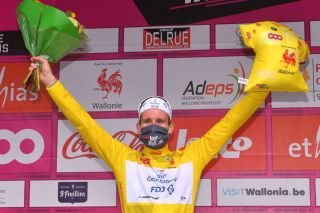 Following his two stage wins and overall victory at the four-day Tour de Wallonie, which concluded on Wednesday, Groupama-FDJ sprinter Arnaud Démare will use his good form to attempt to take his third title at the French national championships road race in Grand-Champ, Brittany, on Sunday.

"I've been thinking about it a lot since they changed the [Nationals] course, which is less difficult than expected," Démare said in a team press release on Wednesday. "With my form and considering the courses I'm able to get over right now, I really believe in my chances."

Teammate, and climber, Thibaut Pinot, has already announced that he will miss the road race on Sunday in order to rest his back, which he injured in a crash at the recent Critérium du Dauphiné, and attempt to recuperate in time for the start of the Tour de France in Nice on August 29.

Démare is not part of the eight-man squad for the French WorldTour team for the Tour, and will instead line up for the rescheduled Giro d'Italia in October.

The 28-year-old said that he was a little surprised to be able to win what was the sixth stage race of his career at the Tour de Wallonie. Démare finished the race with a 20-second buffer overall to CCC Team's Greg Van Avermaet, while Spaort Vlaanderen-Baloise's Amaury Capiot was third, a further five seconds back.

"I wouldn't have thought that I could have won the overall at the start of the week, given the course," he admitted, "but the team was very strong. But after winning the second stage, we didn't want to rule anything out. With the time bonuses, we also had a little advantage today. The route was also made for me these last two days, with a few kilometres after the climbs to try to come back."

Groupama-FDJ sports director Frédéric Guesdon added: "When Arnaud is at his best, he is capable of doing very, very great things. For me, it's not much of a surprise. He's been very strong this week, but the team has been just as strong.

"It also must be said that, usually, when you have a strong leader, the others go along with them," he said.