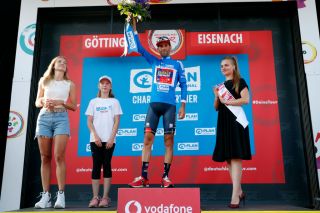 The Deutschland Tour, one of the many events put on by Tour de France organisers Amaury Sport Organisation, has been cancelled due to the German government's prohibition on mass events through August 31 to control the COVID-19 pandemic. The four-stage 2.Pro-ranked race was due to take place from August 20 to 23 but instead will follow the same route for the 2021 edition.

Claude Rach, Managing Director of the Society for the Promotion of Cycling said, “As big as the disappointment is, the current circumstances and the decision by the German authorities make it clear that the Deutschland Tour cannot take place this year. I thank all our public partners, sponsors, sportive participants and fans for their understanding and support. We are already working hard all together to postpone the event to next year and celebrate Germany's largest cycling festival again in August 2021."

Rach said the planned route will be revised with stages in Stralsund and Nürnberg to be held as planned in the 2021 edition and the planned finale in Stuttgart in 2021 to be potentially moved to 2022.

"All the host cities and participating federal states have given a positive signal to this initiative," Rach said. "They underlined their big interest in hosting the tour in 2021 as well. It is the common goal of all partners that the Deutschland Tour will take the same 720 kilometers from Mecklenburg-Vorpommern to Bavaria in the second half of August 2021."

Alexander Badrow, Mayor of Stralsund expressed his disappointment of the postponement. "Of course we are disappointed that in the 30th year of German unity of all things the Deutschland Tour cannot take place - if it should be from northeast to southwest across the Republic. But health comes first, so let's just prolong the anticipation."

The ASO is also facing either a shortened or cancelled Critérium du Dauphiné after France's Prime Minister placed similar restrictions on mass gatherings, although the French Ministry of Sport suggested that the Tour de France might still go ahead beginning on August 29 with restrictions on spectators.

The ASO held Paris-Nice during the early stages of the coronavirus pandemic, with the last stage cancelled and several stages held with restrictions on public gatherings at the start and finish towns.

Although Paris-Roubaix and Liège-Bastogne-Liège are expected to be scheduled for later in the fall, the Volta a Catalunya was given no space on the calendar and has been cancelled, while La Flèche Wallonne, Tour de Yorkshire and Eschborn-Frankfurt are still technically postponed, pending a final decision on the calendar between the UCI and race organisers.