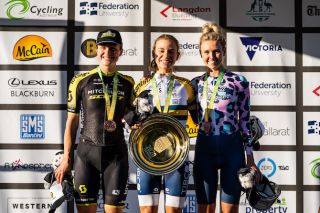 "I am absolutely stoked," Gigante said in a Cycling Australia press release after her victory ahead of Brown and Roxsolt Attaquer's Emily Herfoss. "The time trial is always the race of truth, and I just came here hoping to come out and give it my best shot.

"I was meant to be sitting down in the 'hot seat'," she said, after having set the best time with four other riders still to finish after her, "but I wasn't sitting down; I was up there standing next to the computer, biting everything. I've probably put holes in my new skinsuit, I was so excited."

Gigante was the revelation of Australian cycling last summer after she attacked breakaway companions Shara Gillow (FDJ Nouvelle Aquitaine Futuroscope) and Mitchelton-Scott's Sarah Roy on the penultimate lap of the combined under-23 and elite women's road race, taking both titles by virtue of her solo victory.

Gigante has made the step up to US-based women's team Tibco-SVB for 2020, alongside compatriot – and 2018 national road-race winner – Shannon Malseed, while fellow Australian Brodie Chapman left the team at the end of 2019 to join Gillow at FDJ Nouvelle-Aquitaine Futuroscope.

"I just can't believe I won the elite women's time trial. I don't think I've ever beaten any of the elite ladies that came in the top five in the time trial before, and have probably only beaten them once in a race before," she added, referring to the 2019 road race.

Gigante is set to line up for the national criterium championship in Ballarat on Friday evening ahead of her attempt to defend her road-race title in nearby Buninyong on Sunday.