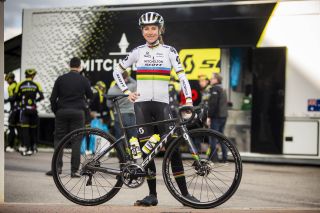 Annemiek van Vleuten (Mitchelton-Scott) is placing a high priority on the Spring Classics as the first objective of her three-pronged approach to the racing calendar during the 2020 season.

The road race world champion will line up for the first time wearing her new rainbow jersey at Omloop Het Nieuwsblad this month, and will place a special target on the Tour of Flanders in April.

"I really like the Classics, they are a good style of racing and always hard," Van Vleuten said confirming her race programme.

"Usually I am a slow starter in the Spring Classics but this time I expect to be ready for Nieuwsblad and carry that forward, so this is pretty exciting for me."

Mitchelton-Scott confirmed that Van Vleuten will also line up to defend her title at Strade Bianche on March 7, before moving on to Dwars door Vlaanderen on April 1 and the Tour of Flanders on April 5. She will then turn her attention to the Ardennes Classics; Amstel Gold Race on April 19, Flèche Wallonne on April 22 and Liège-Bastogne-Liège, which she won last year, on April 26.

"They're all races that really suit me, I don't particularly like the weather but I can deal with it," Van Vleuten said. "I'm not racing a lot, but the races I am doing, I am really targeting.

"After coming so close a few times last year I am really looking forward to racing them again this year. If you come second then there is the possibility to win.

"I will be proud to wear the rainbow jersey in races, as a champion, and of course if I can win in the jersey it would be very special, but winning is always special, whether you're wearing the jersey or not."

Last year, Van Vleuten started her season off the back of a serious knee injury sustained in a crash at the 2018 UCI Road World Championships in Innsbruck. Despite the lengthy recovery process, she made a major comeback to win Strade Bianche last March and then went on to take a string of second places at Tour of Flanders, Amstel Gold Race and Flèche Wallonne before closing out the Classics campaign with a victory at Liège-Bastonge-Liège.

"I think this pre-season has been my best preparation so far from the last five or six years. I have had no setbacks," said Van Vleuten, who has spent time training in Italy with the men's Mitchelton-Scott team and in Colombia.

"I started with a really good off-season; happy, relaxed, going on a holiday and then the training has been going really well since then, especially going to Colombia twice, so I am really looking forward to the spring.

"Knowing how my preparation was last year, with the big setback and injury from the world champs and still doing so well in the Classics campaign, it really gives me a bit more confidence and belief that I will be a contender in every race at the start of the season."

In an interview with Cyclingnews last October, a few weeks after she won her first world road race title in Yorkshire, Van Vleuten said that she was planning to target the Spring Classics, Olympic Games and the World Championships in 2020.

Among her Classics goals is a second victory at the Tour of Flanders in 2020, a race she won in 2011. Despite her success as one of the world's strongest climbers, she wants to show off her versatility as a strong cobbles rider as well, while also racing close to home.

"I've won [Tour of Flanders] before, I know the parcours quite well and these Classics races are also special for me because they're close to my home and my mother will be there to watch and also some of my Belgian fans," Van Vleuten said.

"It is always nice to race close to your home country and people can also now watch these races on TV. They are big impact races so I am really looking forward to starting this season well and being able to debut the jersey at the Classics."