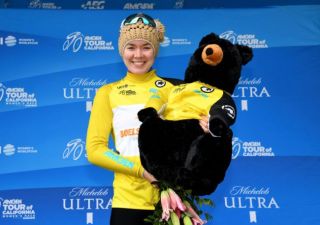 Anna van der Breggen with her prize at the 2019 Tour of California (Image credit: Getty Images)

Anna van der Breggen (Boels Dolmans) was surprised by the cancellation of the Amgen Tour of California and described it as a big loss for women's racing. The two-time champion said that it would be hard for top-level European teams to justify travelling to the US if there are no events on the Women's WorldTour.

"If you come from Europe, like I do, there isn't much racing for us in America," Van der Breggen told Cyclingnews. "The Tour of California was the only reason why we came to race there.

"It felt like when we were there racing, the support was really big, particularly with a lot of fans of women's cycling, and so I would say that it's quite a big loss for American racing."

Organisers of the Tour of California, AEG, announced in October that it would put both its WorldTour and Women's WorldTour events on hiatus for 2020, saying that it has become more challenging each year to host the race.

Kristin Klein, president of the Amgen Tour of California and executive vice president of AEG Sports, said that they have been forced to re-evaluate options. She also said that they were actively assessing every aspect of the event to determine if there is a business model that will allow them to successfully relaunch the race in 2021.

Tour of California through the years - Gallery

Tour of California: 8 conclusions from the men's and women's races

"I was really surprised," said Van der Breggen when she found out that next year's men's and women's races were cancelled.

"I was there in May and the organisers were so enthusiastic about it. They had so many plans for the race to try and do everything better. It was a big surprise."

Tour of California held its inaugural edition of the men's stage race in 2006 and the first edition of a women's one-day event in 2008. While the men's race has always been a week-long event, the women's race started as a one-day criterium before adding a separate invitational time trial. It became a multi-day stage-race in 2015. Both events joined the WorldTour ranks in 2016.

The Tour of California was the only Women's WorldTour race held in the US, after the cancellation of the Philadelphia Cycling Classic in 2017.

Van der Breggen's first experience at racing in the US was at the UCI Road World Championships in Richmond in 2015. After that she travelled with her Boels Dolmans team to compete at the Tour of California Women's Race in 2017 and 2019, where she won overall titles in both editions.

"It was a great race and everything was organised so well, so it's a big loss for the women's calendar," van der Breggen said. "It's especially sad because that race was something really special for us [European riders]. We came from Europe and the racing was a real experience for us. We raced at altitude, too, which we don't normally do in Europe. All of these things made this race really special."

The UCI announced the 2020 Women's WorldTour in June. Notably missing from the race was the Prudential RideLondon Classique due to conflicting dates with the Ladies Tour of Norway. In addition, organisers of the Spanish stage race Emakumeen Bira announced they would cancel the long-running event, which was traditionally held in May.

The loss of both Emakumeen Bira and Tour of California leaves an unexpected gap in the Women's WorldTour calendar in May next year. Van der Breggen said that top-level teams will likely host training camps during that time.

"This year, I went to California and then I stayed in America for an altitude training camp," she said. "I won't do that anymore. But there are always things you can do such as training camps somewhere else."