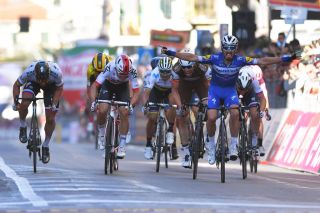 Milan-San Remo is expected to take place on August 15 with an evening finish on the Via Roma after the UCI declined RCS Sport’s request to hold the race on the weekend preceding the Tour de France Grand Départ in Nice.

The UCI is due to confirm the final tweaks to the revised racing calendar on Friday, but after a UCI Professional Cycling Council meeting on Tuesday, RCS Sport announced the dates of their events in Wednesday’s edition of La Gazzetta dello Sport, with CEO Paolo Bellino and Giro d’Italia director Mauro Vegni outlining their displeasure at the latest changes in the WorldTour race schedule.

As already confirmed, the WorldTour will resume in Italy on August 1 with Strade Bianche. Il Lombardia has now been fixed for August 8, with Milan-San Remo a week later, on August 15. That clashes with the rescheduled Critérium du Dauphiné which was moved to August 12-16.

The weekend of August 22-23 will now been set aside for national championships in Europe, though it remains unclear how many countries will hold events on those dates due to different COVID-19 restrictions.

The European Championships have reportedly been pencilled in for August 23-27 and will take place in Brittany after original host Trento asked to postpone the event until 2021. The national championships and European Championships will mean riders will crisscross Europe before then travelling to Nice for the start of the Tour de France on August 29.

“I’m very angry, I argued a lot with president [David] Lappartient,” Bellino told La Gazzetta dello Sport. “He had told me that we could go ahead on August 22 or 23 with Milan-San Remo, and that the national championships and European championships wouldn’t take place.”

Milan-San Remo was postponed in March when the coronavirus pandemic interrupted the cycling season. The event was initially scheduled for August 8 on the first version of the UCI’s revised calendar, with Il Lombardia on August 22, but RCS Sport evinced confidence that they would be able to swap the dates of their Monuments, not least because of the proximity of San Remo to the Tour Grand Départ in Nice.

RCS Sport had already expressed its displeasure that the Giro d’Italia, rescheduled for October 3-25, will clash with the Belgian Classics and the Vuelta a España on the revised calendar, while the Tour de France will not overlap with any Monuments or Grand Tours.

“Nobody was supposed to race in August, the UCI had given us free rein on the dates,” Mauro Vegni told La Gazzetta. “We could do what we wanted and instead, at a certain moment, everybody wanted to race in August. Every day, it’s the opposite of the day before. In the end, we’re the ones who have paid the price for the weight of coronavirus on sporting politics.”

If the calendar outlined in La Gazzetta and Tuttobici on Wednesday is confirmed by the UCI on Friday, Brittany could host three high-profile races in the week preceding the Tour de France.

The French Championships are due to take place in Plumelec, although mayor Stéphane Hamon has previously called for the cancellation of the event if restrictions on public gatherings remain in place in August. The Bretagne Classic in Plouay is scheduled for Tuesday, August 26, while Plouay is also now in line to host the European Championships, as reported by Ouest France last week.

An evening finish on the Via Roma

RCS Sport will now hold no fewer than five one-day races in the opening half of August, beginning with Strade Bianche on August 1. Gran Piemonte has been scheduled for Wednesday, August 5 and the race will take in a tougher course in the Langhe hills around Barolo.

Il Lombardia, traditionally the season-ending Classic, is set for Saturday, August 8. The event will start from Bergamo, the Italian city most afflicted by the coronavirus pandemic, and finish in Como. Milano-Torino will take place on Wednesday, August 12, and, in a change from recent editions, it will not finish atop the climb of Superga above Turin.

Milan-San Remo has been scheduled for Saturday, August 15, a public holiday in Italy – Ferragosto, which marks the focal point of the Italian summer holiday season.

“I want to look at the positive,” Bellino said. “When will we ever again see the Classicissima of spring in the heart of the summer? San Remo and Ferragosto are two very strong symbols. They are both Italian customs, sporting and social. Let’s call it the summer festival of the Italians. It’s even more significant after the suffering and tragedy in recent months.”

Bellino added that Milan-San Remo will finish later than normal, with the arrival on the Via Roma planned for 7pm – though, once again, the final decision is at the discretion of the UCI.

“Our intention is for Milan-San Remo to finish around 7,” Bellino said. “We’ll ask for dispensation from the UCI, because we’ve recently discovered that a new rule was inserted that makes it obligatory for races to finish before 5.30pm.”