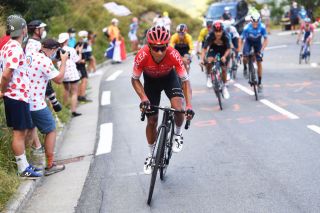 Nairo Quintana (Arkéa-Samsic) remains on track for a high overall finish in Paris in two weeks' time after finishing comfortably with the other favourites in Loudenvielle at the conclusion of stage 8 of the Tour de France on Saturday. The Colombian climber sits in sixth place overall, 13 seconds down on race leader Adam Yates (Mitchelton-Scott), but Quintana will have to continue without the help of teammate Diego Rosa, who crashed out of the race.

"I've got good legs, and all the right signs are there," Quintana said in an Arkéa-Samsic press release after the stage. "I tried to get away a number of times towards the end of the stage, but the other team leaders were always able to get back to the groups I was in, and I finished in Loudenvielle alongside the riders who are in the hunt for the general classification.

"My rivals are very strong," he continued, "and the goal is to try to continue to stay with them at the front of the race. I also just want to say that my thoughts are with Diego Costa, who crashed during the stage, and who has unfortunately had to quit the Tour this evening."

After being taken to hospital in Saint-Gaudens, it was determined that Italian climber Rosa had broken his right collarbone, which will require surgery.

A tale of two teams: Nairo Quintana and the revival of a Tour de France dream

"I was on the descent of the Port de Balès when I lost my front wheel on a corner, and there was nothing I could do to avoid crashing," Rosa explained.

Sports director Sébastien Hinault added: "This first stage in the Pyrenees was both good and bad for Arkéa-Samsic. It was clearly a great performance by the whole team, allowing Nairo to go on the offensive on the Peyresourde, as well as on the stage's final climb. Less good, of course, was Diego Rosa's crash and the resulting broken collarbone.

"But the Tour is a long way from the end. We're part of a race that seems to be a process of elimination," Hinault continued, with Groupama-FDJ's Thibaut Pinot falling away from contention on stage 8 and Jumbo-Visma's Tom Dumoulion losing time as a result of sacrificing his chances for Primoz Roglic.

"This evening, Nairo is still sixth in the general classification, and the top riders are all within a few seconds of each other, and Warren [Barguil] is also in great shape," said Hinault.