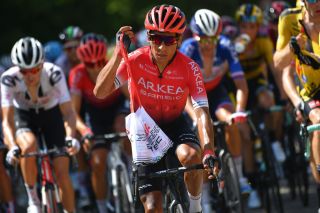 Arkéa-Samsic’s Nairo Quintana – pictured at the 2020 Critérium du Dauphiné – is apparently pain-free in his knee, and ready to challenge for the Tour de France title (Image credit: Getty Images Sport)

Arkéa-Samsic general manager Emmanuel Hubert has stated that Nairo Quintana is suffering no lingering effects from the knee injury that forced him to abandon the Critérium du Dauphiné on the final stage, and that he'll be ready to challenge for the general classification at the Tour de France, which starts in Nice on Saturday.

Quintana had originally injured his knee in early July when he was struck by a car while training in Colombia, but his Ark­éa-Samsic team reported on Monday that he been able to train fully over the past week at a pre-Tour de France camp at Isola 2000 in the French Alps.

The news came as Arkéa-Samsic announced their line-up for the Tour. Quintana will be accompanied in the eight-man squad by his brother Dayer and fellow new arrivals Winner Anacona and Diego Rosa.

Warren Barguil, who placed 10th overall in 2017 and 2019, also features for the Breton outfit, while the roster is completed by Maxime Bouet and Tour debutants Clément Russo and 2018 British road race champion Connor Swift.

Nairo Quintana: I've been in contact with the best at the Tour de l'Ain

"Regarding Nairo Quintana, our designated leader for the Tour, there are no worries," Hubert said in a statement released by the team on Monday. "He has just completed a training camp at altitude at Isola 2000, where he was able to increase the kilometres without any irritation to the knee, which had been injured last July. He will present himself in excellent condition and with desire at the start in Nice next Saturday, just like Warren Barguil."

Quintana has finished on the podium of the Tour on three occasions – he was second in 2013 and 2015, and third in in 2016 – and he has won mountain-top finishes on each of his past two appearances. The 30-year-old's pedigree makes him the obvious team leader for Arkéa-Samsic, and he enjoyed a string of early success after joining the team from Movistar, winning the Tour de la Provence, the Tour des Alpes Maritimes et du Var and the final stage of Paris-Nice, before the season was interrupted by the COVID-19 pandemic.

Quintana's training in Colombia during the hiatus was interrupted by a training crash in early July, but he was back on the bike within a week and he returned to action at the Mont Ventoux Dénivelé Challenge earlier this month.

After placing third overall at the Tour de l'Ain, Quintana had finished with the front group each day at the Dauphiné before he pulled out during the final stage, citing knee pain – although he suggested that the decision had been taken as a precaution with the Tour in mind.

"The Arkéa-Samsic team for the Tour de France will be led by Nairo Quintana, who dominated the early season in races for climbers, with six successes to his name. Nairo has just completed an altitude training camp with some of his teammates at Isola 2000, and will be at the start in Nice in top shape. His past pedigree on the Tour de France gives us legitimate ambitions, but we also know that the competition will be fierce," said directeur sportif Yvon Ledanois, who added that Barguil would be granted a certain degree of freedom in the Arkéa-Samsic squad.

"Warren Barguil will be more than a support for him, and he will also have responsibilities on this Tour de France."

The sentiment was echoed by Hubert, who said: "Warren will be at the service of Nairo so that he can achieve the best possible performance in the GC at the 2020 Tour de France. Nevertheless, Warren will also have responsibilities and, if the race situation allows it, the possibility of playing his own personal hand on certain stages."

Quintana was one of five Tour contenders to abandon the Dauphiné due to injury. His fellow countryman Egan Bernal (Team Ineos) abandoned ahead of stage 4, citing back pain, while Emanuel Buchmann (Bora-Hansgrohe) and Steven Kruijswijk (Jumbo-Visma) were also crash victims, with Kruijswijk forced out after what was thought to be a dislocation of his shoulder in a crash on the descent of the Col de Plan Bois that same day, and Primoz Roglic (Jumbo-Visma) was a non-starter on the final day after he also later crashed on the penultimate stage.

Kruijswijk has since been ruled out of the Tour with what was found to be a fractured shoulder, but Bernal, Roglic and Buchmann are all expected to join Quintana at the start of the rescheduled Tour in Nice on Saturday.