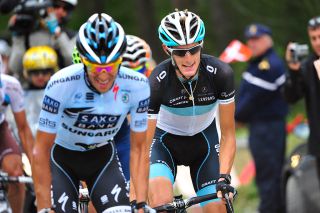 Alberto Contador and Andy Schleck revived their fierce rivalry of years past, going head to head in a race in China on Saturday at the 'Ride like a Pro' expo near Shanghai.

Alberto Contador: The five races that changed my life

Alberto Contador: It's time to enjoy life 100 per cent

The former Tour de France contenders, rather than soaring up the high mountain roads, were instead competing on tiny children's bikes on a parking lot.

Schleck, who was awarded the victory in the 2010 Tour de France after Contador was disqualified for doping, was slow off the blocks - perhaps hampered by being 10cm (4 inches) taller than Contador - and quickly fell behind.

Contador had plenty of time to celebrate his 'victory'...

The event is part of an amateur Giro d'Italia "Ride like a Pro" is a two-day amateur cycling event.

Enjoy the video below.