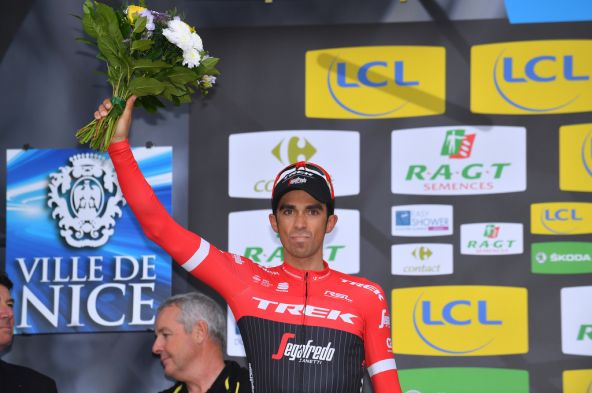 Contador’s 2011 combined spectacular racing, controversy, and his worst Tour de France performance since 2005. He started the year with the Clenbuterol case threatening to keep him from the Tour, so threw himself into the Giro d’Italia, winning two stages, including the fearsome finish on Mount Etna, the points and the overall General Classification. It looked like his luck was in, as the CAS hearing was pushed back from its original June date, allowing him to ride the Tour after all – however luck was against him, and he crashed four times in the first nine stages, losing time and struggling through the race. It’s testament to his talents that his fifth place was seen as a bad result – this was the first time since 2007 that he’d raced and not won.

Despite the fact that was his last race of 2011, he still came second overall in the UCI World Ranking – and he followed it up with a much more personal milestones, his marriage to Macarena, his girlfriend of ten years, in November.

The year of the “Chaingate” controversy, and the positive test for clenbuterol, that overshadowed his third Tour de France win.

The biggest Tour de France rivalry came from his own team-mate, Lance Armstrong – but Contador let his riding do the talking, winning his second Tour.

Astana was banned from the Tour, following Alexander Vinokourov’s doping positive the year before – so Contador focused on the Giro and the Vuelta, winning both, to become only the fifth rider ever, and the first Spaniard, to win all three Grand Tours.

Contador’s first major victory, in Paris-Nice, was followed by the spectacular mountain duels with Michael Rasmussen in the Tour de France – and Contador’s taking home the yellow jersey for the first time, as well as the Best Young Rider prize.

Procycling magazine Spaniard talks to Procycling about the rivalry, why Froome is so strong, and why power meters should be banned

News 'The Tourmalet is going to be mega hard' says Spaniard