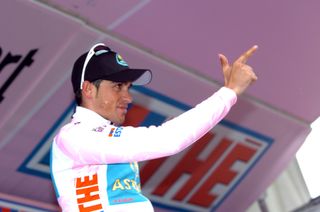 Contador performs his 'Pistolero' salute after taking the maglia rosa at the 2008 Giro (Image credit: Sirotti)

On Sunday, May 25, the 2020 Giro d'Italia should have been coming to the end of its second week with a mountain stage featuring a summit finish at Piancavallo. With no Giro this May, and possibly not at all this year, we're winding the clock back, this time to 2008, and the corresponding stage 15, in the Dolomites, on the penultimate Sunday.

Alberto Contador won the 2008 Giro but was never meant to be there in the first place. Here, he recounts how the 154km stage from Arabba to the Passo Fedaia/Marmolada proved a turning point, putting a wholly underprepared rider into the driving seat.

Taking the lead for the first time in a Grand Tour is always special, but that day in the Giro d’Italia, even more so, because, as people who’ve followed my career will remember, I had no intention of being in the Giro in 2008. It all happened because of a late call-up after the race organisation told Astana I had to ride.

Of the several big consequences of that late decision to take part, one of the most important was that I hadn’t done any recons whatsover of the mountain stages. So we got to the Passo Fedaia/Marmolada stage and by chance the Astana team hotel was right at the foot of the climb. As we had the climb on our doorstep, as it were, myself and the directeur sportif Alain Gallopin drove up the Fedaia in the car on the morning of the stage before going on to the start.

Alberto Contador and the Giro d'Italia that never was

Not having planned to be in the Giro d’Italia made for a very tough start for me, and this was the hardest stage yet of the race, on top of which Riccardo Ricco [second overall - ed] and Danilo Di Luca [2007 Giro d’Italia winner - ed] were constantly on the attack.

But then I went up that climb pretty well, riding much of it with Denis Menchov (Rabobank, 2009 Giro winner - ed), and I was strong enough to attack him right at the last minute. I wanted to be sure I could get as much time on him, as I was worried about the time Denis might be able to pull back in the last time trial in MIlan.

Anyway, I got the lead and, after all the ceremonies were over, as it happened it was me and Alain Gallopin who got in the team car again to head for the hotel. Except instead of us two driving up the climb in the morning wondering what on earth would happen in the stage, there we were, driving down the Fedaia after the stage, with me as race leader.

Behind the scenes, it wasn’t so complicated in Astana that year, because both of my teammates who could also have been GC challengers, Levi Leipheimer and Andreas Klöden, had lost a lot of time already, so I was pretty much established as the leader.

It’s true I had lost time on Klöden the first mass start stage of the Giro on a little climb that was an uphill finish, but then the real key moment of that first part of the Giro for me was on stage seven, [an uphill finish to Pescoconstanzo - ed]. [Leonardo] Piepoli took off with Ricco and Di Luca and the only other GC challenger that could follow them was me. Klöden and Levi were dropped, so that settled that question.

On stage seven, I couldn’t believe I was still up there with the Italian guys. I wouldn’t work because I was so nervous I would get dropped, and in fact I did get dropped on the last climb, but that was when I was really on the limit. But at least I could stay with them up to that point and only lost a little bit of time.

Stage seven was when people begin to say I hadn’t been on holiday before the Giro, too, and it was also the first day that I thought that maybe I could win the race. I kept that thought to myself, though.

Then two days later, after I got second in a time trial behind [Marzio] Bruseghin (third overall - ed) and almost won it, I rang Johan [Bruyneel, team boss] and told him I was staying until the end of the race, rather than quit and go to the Dauphiné, like the team had originally wanted me to do.

Less than a week later, on the Fedaia, I was in the lead, and I took the maglia rosa to Milan.