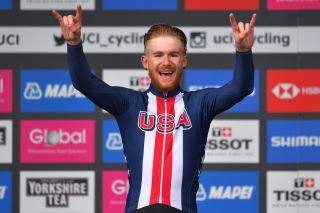 Quinn Simmons will follow in the footsteps of Remco Evenepoel, skipping the U23 ranks and heading straight for the WorldTour, signing with Trek-Segafredo following victory in the junior men’s road race at the UCI Road World Championships.

The American triumphed in Yorkshire in spectacular fashion, attacking alone some 33km from the finish. It was the latest feat in a meteoric rise for the 19-year-old, who rode his first road race less than two years ago after previously specialising in mountain biking.

After finishing third in the 2018 Junior Gent-Wevelgem – his first race in Europe – Simmons has been prolific on the junior scene this year, going back to win Gent-Wevelgem before winning the SPIE Juniorendriedaagse, Grand Prix Rüebliland, and Keizer de Juniores.

"We have been on the lookout for young talents that we could develop within our ranks at the top level of cycling," said Trek-Segafredo General Manager Luca Guercilena. "This has been our philosophy since a few years already, and we have been keeping an eye on both Simmons and Tiberi well before the World Championships. In Yorkshire, we just witnessed confirmation of both their talents."

It is extremely rare for a rider to go straight from the junior ranks to the WorldTour without racing as an U23 but Evenepoel has made it seem easy, winning the Clasica San Sebastian and the European time trial title, along with silver in the elite Worlds TT on Wednesday, in his first season with Deceuninck-QuickStep.

Such was the impact made by Simmons in such a short space of time, several WorldTour outfits were interested. Team Sunweb manager Iwan Spekenbrink confirmed to Cyclingnews that they had invited him for training sessions and made an offer to join their U23 development set-up.

"Quinn definitely drew our attention by winning Gent-Wevelgem and then both his National TT and RR titles earlier this year," Guercilena said. "Obviously, he has shown his huge potential again by winning the world championships. Given his young age, we want to let him mature slowly and not rush things or put too much stress on his shoulders, but we feel he can handle the one-day races at the top level.

"We are convinced that having him in Belgium where he can be closely guided by our performance team and sport directors will be very fruitful for his development and that in a few years from now he will confirm the talent he is showing right now."

Cyclingnews understands Simmons had two other solid offers from WorldTour teams in EF Education First and Bora-Hansgrohe, with Deceuninck-Quick and Jumbo-Visma also tracking his progress.

"I’m super excited to be making the step to the WorldTour with Trek-Segafredo," Simmons said. "Their proven ability to develop young riders and a history of success in the Classics makes this the best place for me to continue my development. Over the next two years, I hope to learn as much as possible and make big steps towards the goal of one day winning Paris-Roubaix.”