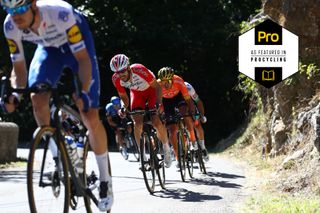 With 19 kilometres to go on stage 6 of the Tour de France, Alexey Lutsenko accelerated at the front of the five-rider breakaway just as the group were about to hit the steepest section of the Col de la Lusette. Out of the back dropped Jesús Herrada.

The Spaniard’s head went down, and then down again, as he watched the road open up and the group disappear away from him. It’s been 12 years since his Cofidis team have won a stage at the Tour, and yet again it looked like another chance, a really decent one at that, for a win was drifting away.

Herrada had been in the breakaway since it formed in the early stages of the day, ahead of the summit finish on Mont Aigoual. The peloton and GC contenders seemed content to let the group stay away, with the gap exceeding five minutes at its peak, and coming up the Col de la Lusette, the riders still had a three-minute buffer: the win was coming from this group of five. For a climber such as Herrada, who won a stage at the Vuelta a España last year from a similar breakaway (also on stage 6), the odds looked good.

Cofidis’s raison d‘etre is their home Grand Tour. As well as being one of the longest-running teams in the peloton, the French squad is also one with a long history of success here; they have 10 stage wins out of 23 race starts, as well as a King of the Mountains title courtesy of Christophe Rinero in 1998. But the last time the team won a Tour stage was in 2008, when Sylvain Chavanel won from a two-rider sprint into Montluçon on stage 8.

In Tim Krabbe’s book ‘The Rider’, the tale of a fictional race set on the same Mont Aigoual climb as the stage 6 finish, Krabbe invents his own phrase, ‘battoowoo greekgreek’, a random and meaningless word that’s gone down in cycling folklore to convey the feeling of emptying one’s mind and thinking about nothing; to focus on the pain and just keep going. It’s a phrase that fitted, watching Herrada, as he started to claw his way back to the riders ahead of him.

With 18km to go, the 30-year-old was at the point of reaching Nicolas Roche’s back wheel, when Neilson Powless, the young American climber at EF Pro Cycling, accelerated as the gradient hit 11 per cent. The gap opened back up again, and this time Herrada was cut adrift with the Irishman.

Still Herrada kept plugging on. He dropped Roche, and began grinding his way up to Greg Van Avermaet, the next rider up the road, another victim of the steep slopes. Another kilometre later and he’d caught the Olympic champion. Powless, since dropped by Alexey Lutsenko who now led the way, was next in Herrada’s sight. With 16.6km to go, he passed him. Now there was only Lutsenko between him and the line.

As the gradient eased, Herrada got into his rhythm. Having once looked totally out of the hunt, now just 20 seconds separated him and Lutsenko. Could we be about to see one of the best Tour comebacks?

With 15km to go, mouth gaping open, gasping for air, he chugged down a gel from his back pocket, a last-ditch attempt to find a few more ounces of energy. But the gap wouldn’t close, no matter how hard he stamped on the pedals. And as has become the pattern for Cofidis, the road was too long. He crossed the line in second place, 55 seconds down on Lutsenko. It was an impressive, valiant ride, but another chance at a stage win had gone missing.

Cofidis now have three top-10 finishes in the first six stages of this year’s Tour. On stage 1, Elia Viviani finished sixth in the sprint in Nice. Then Guillaume Martin finished third on Orcierès-Merlette on stage 4, after a spirited ride that saw him attack first out of the group of GC favourites. Now Herrada has a runner-up spot.

Since Cedric Vasseur took over as team manager in 2017 he’s been slowly transforming the squad with the aim of getting them back to the top, and winning, in races such as the Tour. This year they moved up to the WorldTour - and spent money on star signings such as Martin and Viviani - where the scrutiny is even more intense. Performances from the likes of Herrada and Martin, the latter a canny signing this year just as the Frenchman looks to be coming into his peak years, will surely provide confidence boosts. But neither has resulted in the long sought-after stage win. Cofidis’s hunt goes on another day.